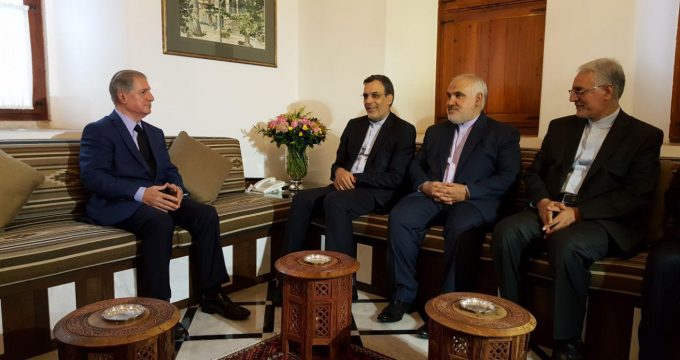 IRNA – Islamic Republic of Iran is like a brother that Lebanon is relying on his support for its own stability, former Lebanese President Amine Gemayel said.

Gemayel, hosting Iran’s Deputy Foreign Minister Hossein Jaberi Ansari in the Lebanese town of Bikfaya, described Iran as a big country with a significant role in the region and stressed the importance of friendly ties between Lebanon and Iran.

Pointing to the ongoing difficult situation in the region and the risk of disintegration of nations, the former Lebanese President emphasized a practical initiative for securing peace in the region.

Jaberi Ansari, for his part, said that Iran’s approach towards Lebanon, as a country with political and ethnic diversity, is based on a comprehensive one embracing balanced ties with all components of the Lebanese society.

Welcoming the ‘regional security initiative’ suggested by Gemayel, Iran’s Deputy Foreign Minister for Arab-African Affairs pointed to the plan introduced by the Iranian Foreign Minister Mohammad Javad Zarif on establishing a council of regional talks, and stressed that Zarif’s main goals for the region is establishing security.

After the meeting, the Iranian official denied the reports on any mediation between Kataeb party and the parties composing the current Lebanon government.

Kataeb has refrained from participating in the coalition government due to political disputes with other parties.

The Lebanese people and groups are a role model for co-existence and do not need any mediation, according to him.

He has visited some senior Lebanese officials, including President Michel Aoun, Leader of the Progressive Socialist Party Walid Junbalat and the country’s Foreign Minister Gebran Bassil.

Some other meetings between the Iranian official and Lebanese figures are also scheduled for Wednesday.