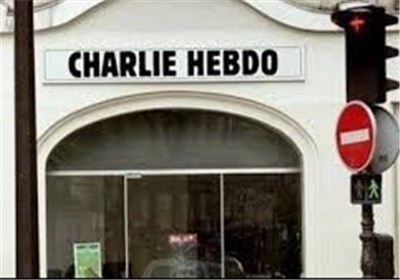 Press TV – The French magazine Charlie Hebdo has stirred outrage with yet another offensive cartoon, this time linking Islam to the recent terror attacks in Barcelona, Spain.

In its newest attempt at ill-intended humor, the notorious magazine published a cartoon on Wednesday that showed people lying in a pool of their own blood after being run over by a van with the caption reading: “Islam, religion of peace… eternal.”

Featured on the front-page of Charlie Hebdo’s latest issue, the painting bears a reference to a vehicular attack that killed over a dozen people and wounded dozens more on a tourist-packed boulevard in Barcelona last Thursday.

This was one of the two back-to-back terrorist operations carried out by what authorities described as a disbanded 12-man terror cell, reportedly tied to Daesh Takfiri group which claimed responsibility for the attacks.

The cartoon has prompted an outpouring of reactions on social media, with critics blasting the magazine for attempting to damage the image of a religion practiced by more than 1.5 billion people and implying that it is inherently violent.

“When you’re a journalist you need to exercise restraint because making these associations can be used by other people,” the Socialist MP and former minister said.

A Twitter user said the cover was “worse than the worst of anti-Irish racism in the UK media.”

Charlie Hebdo Editor Laurent “Riss” Sourisseau defended the move, saying it was an attempt at clarifying “the role of religion, and in particular the role of Islam, in these attacks.”

The magazine’s new cartoon was the latest in series of controversial artworks that have prompted international criticism.

In November last year, Russia accused the magazine of committing “sacrilege” by poking fun at Daesh’s downing of a Russian passenger plane over Egypt, which killed 224 civilians.

In January 2015, two Daesh sympathizers attacked the magazine’s offices in Paris, killing 12 of its staff. The attack, condemned by Muslims across the world, was allegedly a response to the magazine’s blasphemous cartoon of Prophet Mohammad (PBUH).