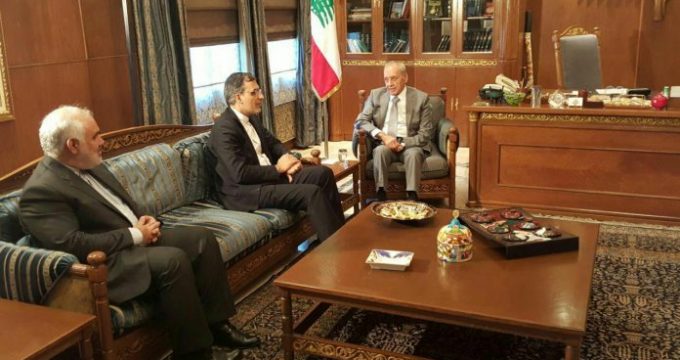 The top Iranian official also thanked Lebanon for its major role in fighting terrorism and countering the Israeli occupation.

He also presented a report on the regional issues and the latest developments pertaining to the Astana Process aimed at restoring stability to Syria and settling the crisis in the Arab country.

Iran’s deputy foreign minister said two priorities of the Iranian Foreign Ministry during President Rouhani’s second term in office are to boost regional cooperation and give fresh impetus to economic diplomacy. He said Iran pays due regard to Lebanon in that respect.

The Lebanese parliament speaker, in turn, conveyed his warmest greetings to Larijani, and highlighted Iran-Lebanon age-old relations as well as Imam Musa Sadr’s key role in consolidating bonds between the two nations.

Berri also underscored the need to enhance mutual cooperation. He then touched upon plots to disintegrate the regional countries and put emphasis on the importance of regional cooperation to ward off that threat.