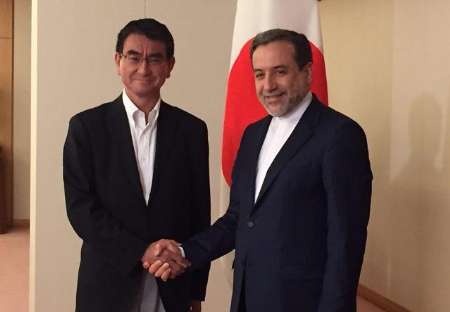 Japanese FM: Tokyo policy based on boosting ties with Iran in all fields

IRNA – Japanese Foreign Minister Taro Kono said on Thursday that his country’s policy regarding Iran is still to advance all-out ties with Tehran.

n a meeting with Deputy Foreign Minister for Legal and International Affairs Seyyed Abbas Araqchi, he congratulated President Rouhani’s reelection for another four-year term in office, hoping that bilateral relations, especially in the economic domain, would improve in post-JCPOA era.

Referring to the implementation of agreement on encouraging investment in both countries, grounds for making optimal use of existing capacities will be paved once cooperation documents are finalized.

Throwing his support behind the nuclear deal officially known as Joint Comprehensive Plan of Action (JCPOA), the Japanese minister hoped that a successful example of economic cooperation will take shape between the two countries.

Expressing willingness to visit Tehran in opportune time to reciprocate his counterpart Mohammad Javad Zarif’s last December visit, he said that deepening ties with Iran and keeping on consultations on regional developments are among Japan’s priorities.

Araqchi, for his part, congratulated Kono’s appointment as foreign minister, saying that it is pleasing to see Japan is determined to boost bilateral ties, particularly in economic sphere.

Noting that the nuclear deal has paved the way for promoting relations and using the two countries’ potentials, he said that today, conditions are prepared for pushing forward economic cooperation more than before.

He also hoped that Japanese companies will utilize economic opportunities that have emerged after the implementation of the nuclear deal in Iran.