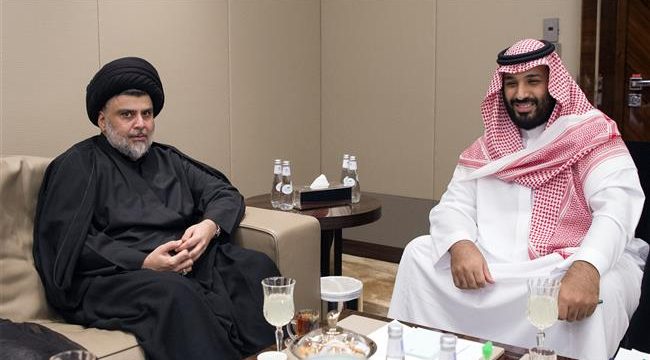 Financial Tribune – Lawmakers said the recent meeting of prominent Iraqi Shia cleric Muqtada al-Sadr with Saudi Crown Prince Mohammad bin Salman was a “strategic mistake” that would only be to Iraqi people’s determent.

In a recent talk with ICANA, lawmaker Mohsen Kouhkan said, “Pinning your hopes on al-Saud regime, the main backer of takfiri terrorism in the region, is a strategic mistake that very soon would make al-Sadr regretful.”

Takfiris, inspired by Saudi Wahhabism, are hardliners who accuse Muslims not following their extremist interpretation of Islam as heretics punishable by death.

Sadr, known for his anti-American rhetoric, is an Iraqi politician and heads a militia. He is the leader of a political party, the Sadrist Movement and the leader of Saraya al-Salam, a Shia force that is a reformation of the previous militia he led during the American occupation of Iraq, the Mahdi Army. However, he does not have any official title in the Iraqi government.

Kouhkan, however, noted that the meeting does not represent the view of Baghdad’s government.

“Although Sadr has some seats in the [Iraqi] parliament, his approach does not necessarily reflect that of the Iraqi government,” he said.

In what many believe was the first outcome of the meeting, Sadr on Friday called on the Baghdad government to dismantle the paramilitary Hashd al-Shaabi umbrella organization dominated by Shia voluntary fighters.

In a speech broadcast on huge screens, Sadr urged Iraqi Prime Minister Haider al-Abadi to dismantle Hashd and integrate “disciplined members” of the paramilitary force into the army.

The paramilitary force, known as Popular Mobilization Units, took part in the battle to retake Iraq’s second city Mosul from the self-styled Islamic State terrorist group, and could join future operations aimed at ousting the extremists from areas of the country they still hold.

Abadi rejected Sadr’s call on Saturday, saying that not only PMU won’t be disbanded, but it will also take part in upcoming battles targeting IS havens.

“The Popular Mobilization is under the command of the clergy and the state. It belongs to Iraqis and it shall not be disbanded,” the prime minister said.

Lawmaker Jalil Rahimi said the visit could indicate that Sadr is seeking to make up for the declining sway of his militia as PMU’s influence is on the rise.

Rahimi said Sadr knows that his group is no longer a leading force in Iraq and cannot afford to come under more pressure by the US and its allies.

Sadr’s militia has been censured in the past by the US for its anti-American positions.

“He decided to enter Riyadh’s orbit because he wants to regain his past clout,” he concluded.

“Both Saudi Arabia and Iraq are solid partners of the United States,” an unnamed US State Department official told the Abu Dhabi-based National newspaper. “We welcome strong relations between the two countries and continue to support their efforts and outreach in this regard.”