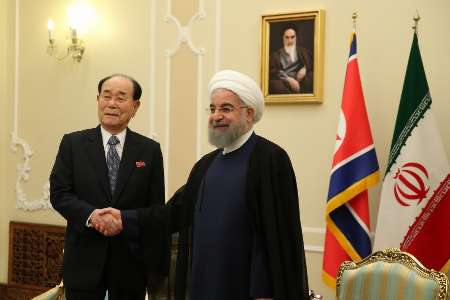 IRNA – President Hassan Rouhani said that Iran favors peace and calm in the Korean Peninsula as it believes that dialogue is the only solution to the disputes in the region.

In a meeting with the President of Presidium of the Supreme People’s Assembly of North Korea Kim Yong-nam on Sunday, he hoped that negotaitions between the two Koreas will soon begin, saying, “We believe that negotiating table is the best place to end disputes.”

Recalling that Iran and North Korea have had excellent ties which still continue, Rouhani said that all the nations should be held in esteem and any interference in other countries’ internal affairs is incorrect.

Kim Yong-nam, for his part, congratulated Rouhani’s reelection, saying it is indicative of the Iranian people’s confidence in their government’s policies.

“We are keen on promoting ties with Iran in all fields such as economy, sciences and technology,” he said.

Underlining the need for reinforcing the role of Non-Aligned Movement (NAM), he hoped that reinvigoration of NAM would help forge constructive cooperation between member states in line with promoting peace and security.

Rouhani was sworn in for his second term in office on August 5 and the North Korean official was in Tehran to take part in the ceremony which was attended by nearly 100 high-ranking delegations from foreign countries and international organizations.