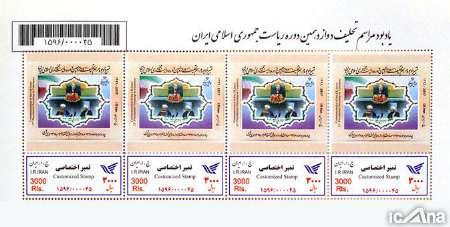 IRNA – Stamp featuring swearing-in ceremony of President Hassan Rouhani was unveiled in a meeting on Saturday attended by heads of three branches of the government.

Rouhani’s oath-taking ceremony was held late on Saturday with senior delegations from 92 countries in attendance.

The stamp was unveiled at the end of the swearing-in ceremony in the presence of President Rouhani, Majlis Speaker Ali Larijani and Judiciary Chief Ayatollah Sadeq Amoli-Larijani.

Some 70 delegations from foreign countries and international organizations were in Tehran to take part in President Hassan Rouhani oath-taking ceremony on August 5.