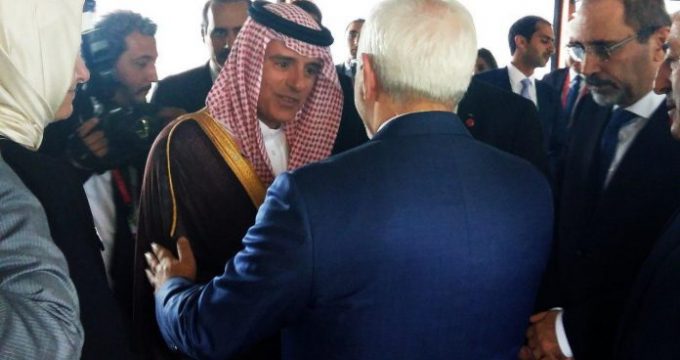 Al-Monitor- On Aug. 1, the foreign ministers of Iran and Saudi Arabia surprised political observers by shaking hands with each other at the Organization of Islamic Cooperation (OIC) meeting in Istanbul. Given that the encounter came in the wake of months of direct verbal clashes between the two over regional developments, some saw the unexpected greeting as potentially signaling a glimmer of hope for improvement in the Iran-Saudi relationship.

Following the warm greeting, Mohammad Javad Zarif told Iranian journalists Aug. 1 that what happened on the sidelines of the OIC summit was a “diplomatic norm” and based on “mutual respect” and a “long-standing friendship” with Adel al-Jubeir. He added that the brief encounter was not groundwork for the resumption of diplomatic relations, which Saudi Arabia cut following the storming of its diplomatic facilities in Iran over its execution of a dissident Shiite cleric.

In response to a question about whether there was any link between the greeting with Jubeir and Iraqi Shiite cleric Muqtada al-Sadr’s trip to Saudi Arabia on July 31, Zarif said Aug. 2, “The policy that Saudi Arabia is pursuing in Iraq had no relation with this encounter. This was just a simple greeting.”