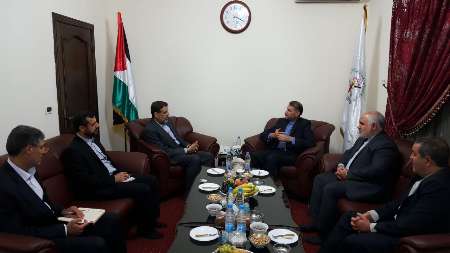 FNA- Senior Advisor to the Iranian Parliament Speaker Hossein Amir Abdollahian in a meeting with Secretary General of Islamic Jihad Ramadan Abdullah in Beirut underlined that Israel’s recent atrocities outside the Al-Aqsa mosque has ignited a new Intifada.

“The incident once again draw the attention of the public opinion in the Islamic world to the holy Qods and Al-Aqsa mosque which is a political and religious issue,” Amir Abdollahian said.

Amir Abdollahian underlined that the recent incident in Al Aqsa mosque and carnage of Palestinian people ignited a new Intifada leading to panic and withdrawal of Zionist military forces.

“Zionist regime requires normalizing ties with Arab countries, but regretfully some Arab leaders and those claiming to be advocate of Palestine have adopted different approach which is regarded as treason to the cause of Palestine,” the top advisor said.

Ramadan Abdullah, for his part, said the recent crimes of the Zionists in Al Aqsa Mosque has triggered a new wave of Intifada against Tel Aviv.

“The resistance front is to continue its struggle against Zionists until return of all refugees and formation of a unified Palestinian government,” he said.

“We believe that resistance will be the best way to materialize aspiration of Palestine,” Amir Abdollahian added.

In relevant remarks earlier in July, Amir Abdollahian underlined that the restrictions imposed by Israel on the Palestinian people in al-Aqsa mosque would lead to a new Intifada.

Imposing oppressive rules which limit entering of real owners of Palestine to al-Aqsa mosque will create a new Intifada in the occupied lands, Amir Abdollahian said on his telegram account.

“The Islamic Republic supports the recent position of the Palestinian resistance leaders in condemning the Zionist regime’s crimes,” he noted.

Noting that cut of Fatah Movement relations with the occupying regime is necessary, Amir Abdollahian said that the demonstration of oppressed people of Palestine in the ‘Day of Rage’ showed that the Palestinians cannot stay patient any more in the face of the Quds occupying regime’s crimes.

He underlined continuation of Iran support for the oppressed people of Palestine.

Palestinians across the occupied West Bank and besieged Gaza Strip participated in a “Day of Rage” last week to express their rejection to Israeli policies at the holy site, while clashes broke out during several marches after Israeli forces attempted to suppress the actions.

The protest rallies were held as tensions have continued to rise in occupied East Jerusalem after Israeli authorities implemented security measures at gates of Al-Aqsa Mosque compound.

Clashes between Palestinians and Israeli forces broke out in Ramallah, where three Palestinians were injured with live ammunition, and Bethlehem, where a Palestinian and international activist were detained by Israeli soldiers.