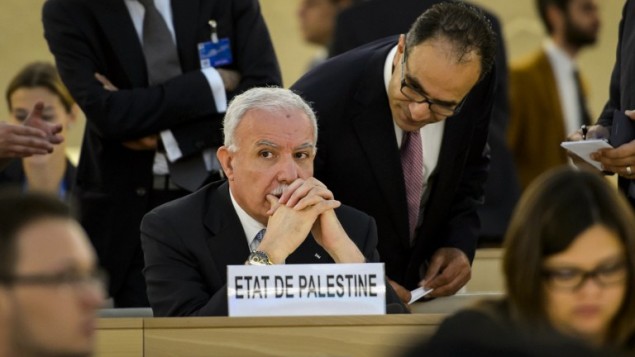 Israel could soon launch new round of ‘nasty’ actions in Quds: Palestine FM

Press TV – The Palestinian foreign minister has warned that Israel could go for another round of “nasty” actions aimed at changing the status quo of the al-Aqsa Mosque compound, which recently witnessed deadly tensions sparked by the regime’s restrictive measures there.

Riyad al-Maliki made the remarks in an address to an emergency meeting of the Organization of Islamic Cooperation (OIC) on al-Aqsa in the Turkish city of Istanbul on Tuesday.

Tensions erupted in East Jerusalem al-Quds after a deadly shootout on July 14 outside the Haram al-Sharif, which Jews call Temple Mount.

Using the gunfight as a pretext, Israel set up metal detectors and surveillance cameras at entrances to the al-Aqsa compound.

Palestinians held protests and complained that the bans were meant to expand the regime’s control over the highly-sensitive site.

On July 24, Tel Aviv backed down in the face of violent clashes and removed all the restrictions at the al-Aqsa compound, but tensions still remain high there.

Maliki described Israel’s decision to remove the devices at the al-Aqsa gates as a “small victory in the long battle for freedom.”

“We know that Netanyahu is not going to accept defeat and he will try again and again with different methods and different means to impose his own status-quo over the Haram al-Sharif and al-Quds. We have to be prepared for the next round which could come very soon and could be very nasty,” he added.

Meanwhile, Turkish Foreign Minister Mevlut Cavusoglu called on the Muslim world to stand against the Israeli “injustice” and recognize the state of Palestine within the 1967 borders with East Jerusalem al-Quds as its capital.

“We should show our support to the Palestinians, who have been living under Israeli occupation for fifty years, millions of them who had to leave their home, not just with our dry words, but with our actions,” he told the OIC meeting.

The top Turkish diplomat further expressed hope that the recent tensions at the al-Aqsa compound won’t be repeated, saying, “We should all be very careful against provocations. No bans or limitations, including the age restrictions to the Temple Mount cannot be accepted.”

Israel seized East Jerusalem al-Quds in the 1967 Six-Day War. It later annexed the Palestinian territory in a move that has never been recognized internationally.

Jordanian Foreign Minister Ayman Safadi, whose country is the custodian of the al-Aqsa Mosque compound, described Jerusalem al-Quds as “an Arab, Islamic holy site,” warning Israel against putting regional security at risk through its provocative actions.

“Instead of gambling with the security of the region and with the right of the people to live safely and in stability, Israel should work on achieving peace that leads to the establishment of the independent Palestinian state, with East Jerusalem as its capital,” he added

In its final communiqué issued on Tuesday, the OIC expressed its determination to defend the al-Aqsa Mosque compound from all threats posed by Israel and denounced the premeditated Israeli attempts to alter the site’s status quo.

It further stressed “the Palestinian right to full sovereignty over the city of al-Quds al-Sharif as the capital of the state of Palestine.”

“The Committee condemns the banning of Palestinian Muslims and Christians from their natural right to worship in the holy sites in al-Quds al-Sharif, through employing collective punishment measures, and the use of lethal and excessive force against peaceful Palestinian worshipers,” it pointed out.

“The continuation of open Israeli aggression against the Palestinian people in Al-Quds places singular and collective responsibility on the shoulder of OIC Member States so that they can take measures to confront these challenges,” he said.