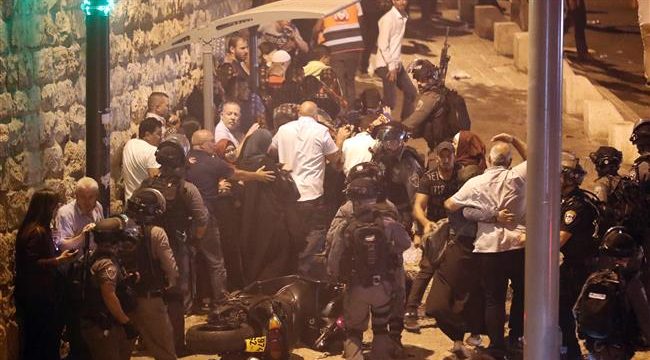 Press TV – The UN has warned that recent tensions caused by restrictions imposed on the al-Aqsa Mosque may have a catastrophic outcome.

“I call on the parties to refrain from provocative actions, show restraint and work towards finding a solution. It is extremely important that a solution to the current crisis be found by Friday this week. I think the dangers on the ground will escalate if we go through another cycle of Friday prayer without a resolution to this current crisis,” said United Nations Middle East Envoy Nickolay Mladenov on Monday.

“Nobody should be mistaken that these events are localized events. In fact, they may be taking place over a couple of hundred square meters but they affect millions, if not billions, of people around the world. They have the potential to have catastrophic costs well beyond the walls of the Old City, well beyond Israel and Palestine, well beyond the Middle East itself,” he added.

Meanwhile, the Tel Aviv regime has announced that it will remove the metal detectors it had placed at the entrance of al-Aqsa and replace them with other surveillance means.

The announcement was made following a cabinet vote over the subject for the third time in five days.

Palestinians have said that the removal of the detectors does not fulfill all of their demands, stressing that they will carry on with their protest until all restrictions are removed from the holy site.

The call was made during a phone conversation with Netanyahu in which the king stressed “the need to find an immediate solution and remove the reasons for the ongoing crisis at the Haram al-Sharif compound.”

Accordion to a statement released by Jordan’s royal palace, Abdullah called on Netanyahu to stop the “new measures taken by Israel since the start of the latest crisis.”

He also highlighted “the importance of an agreement on any measures to prevent a repeat of this escalation in the future.”