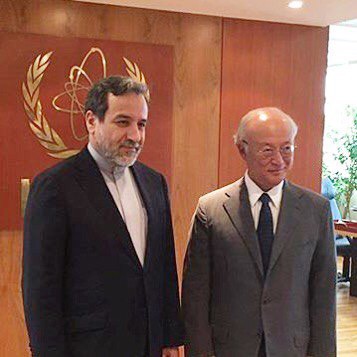 Iranian Deputy Foreign Minister for International and Legal Affairs Seyed Abbas Araghchi and the IAEA Head Yukai Amano met late on Thursday in Vienna at the headquarters of the IAEA to discuss the cooperation between Iran and the UN’s agency.

The meeting was held one day before the eighth Joint Commission of JCPOA between Iran and 5+1 which is going to start early on Friday jointly chaired by Seyed Abbas Araghchi and Secretary General of European External Action Service (EEAS) Helga Schmid.

During the meeting with Amano, Araghchi reiterated the principle policies of the Islamic Republic of Iran in terms of the JCPOA and implementation of the related obligations, the importance and sensitivity of IAEA’s role in unbiased and professional supervision of practicing the agreement, and Iran’s serious complaint about the US new administration’s disloyalty and unconstructive approach to the deal.

Yukai Amano, for his part, voiced gratitude towards Iran’s good cooperation with the agency and the full implementation of the commitments by the Islamic Republic, something which has been reflected in numerous IAEA’s reports. He also voiced hope that the agreement would be practiced by letter by all sides of the JCPOA.