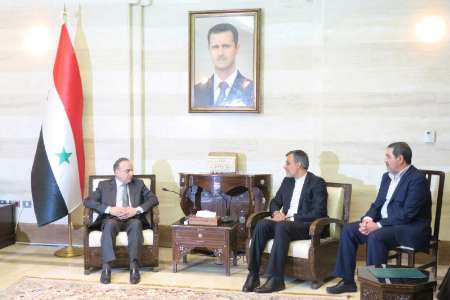 Tasnim – Syrian Prime Minister Imad Khamis praised Iran for the support it has given to Syria, calling for the enhancement of economic relations between Damascus and Tehran.

In a meeting in Damascus on Wednesday, the Syrian prime minister and Iran’s Deputy Foreign Minister for Arab and African Affairs Hossein Jaberi Ansari discussed a range of issues, such as the latest regional developments and Iran-Syria cooperation in various fields.

Stressing the need for the promotion of economic ties between the two countries, Khamis expressed the hope that Iranian First Vice-President Eshaq Jahangiri would take up an invitation to visit Syria soon, so that the two sides would pursue plans for broader economic interaction.

For his part, the Iranian diplomat hailed the “strategic ties” between Tehran and Damascus, calling for the implementation of the economic agreements the two sides have already signed.

In a separate meeting earlier in the day, Jaberi Ansari held talks with Syrian Foreign Minister Walid Muallem to discuss the most recent regional and international developments.

Their talks were focused on the diplomatic efforts to settle the crisis in Syria within the framework of the Astana and Geneva talks.