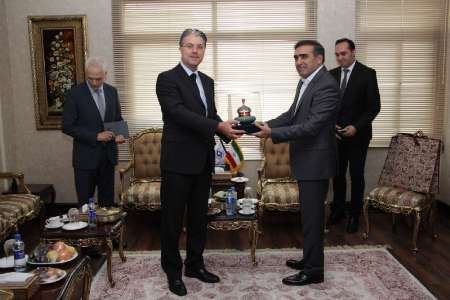 In a meeting with Turkish ambassador to Tehran Reza Hakan Tekin on Monday, Bahman Abdollahi said given the activities of cooperatives in different sectors of the two countries, it seems that they can be a proper ground for the development of Iran-Turkey’s bilateral relations.

Abdollahi referred to the meetings he had with other countries’ ambassadors and the idea of forming a joint economic working group consisting of their businessmen and Iran’s chamber of cooperative to have common projects, adding that regarding Iran-Turkey’s long-standing trade ties, we can also use this model to expand business relations.

Touching upon Iran and Turkey president’s emphasis on enhancing the volume of economic exchanges to up to 30 billion dollars, he stated that cooperatives can help the countries achieve the goal.

Elsewhere in his remarks, head of Iran chamber of Cooperatives said we are ready to send trade delegations to Turkey, host the Turkish commercial, industrial and commercial groups, as well as hold special exhibitions in both countries.

Iranian President Hassan Rouhani and his Turkish counterpart Recep Tayyip Erdogan, recently expressed their countries’ readiness to shore up bilateral ties especially in the economic field, saying Iran and Turkey are keen to open a new chapter in bilateral ties and take a leap in their economic cooperation.