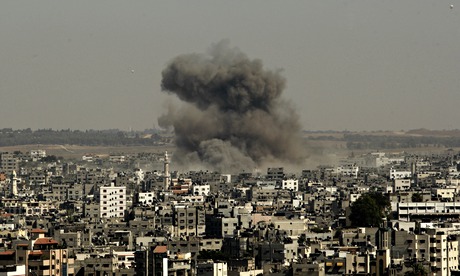 Israel is the main cause of suffering in Gaza, Abbas is the secondary one

American Herald Tribune | Robert Fantina: The Gaza Strip, sometimes referred to as the largest open-air prison in the world, is home to nearly 2 million people.  It has a population density of over 9,000 people per square mile, roughly the same as Washington, D.C. Yet that is where any similarity between Gaza and Washington ends. Gaza has been blockaded, in violation of international law, by Israel for a decade, preventing vital products, including medicines and construction materials, from entering. Over 60,000 people rendered homeless by Israel’s brutal bombing campaign of 2014 remain homeless. The unemployment rate, at 42%, is among the highest in the world. People in Gaza are ready, willing and able to work, but due to the blockade, there is little work available.

For years, there has been a limit to the amount of hours that residents of Gaza had electricity; Israel’s bombing of power plants in 2014 worsened this. This lack of electricity is causing problems with vital hospital services. In addition, much of the water is not safe to drink, and untreated sewage is being dumped into the Mediterranean Sea. The potential for catastrophic disease is increasing drastically.

A panel of experts on the situation in Gaza issued this statement on July 12: “The two million residents of Gaza are suffering through a humanitarian crisis that is entirely human-made. It represents a complete failure of all parties to uphold their fundamental human rights obligations, including the inalienable right to life.”

And now, the collaboration of Mahmoud Abbas, the leader of Fatah, which governs the West Bank, with the criminal regime of Israel, has brought the Gaza Strip to the brink of humanitarian disaster. He withholds payments due to government employees in Gaza and has refused to allow the construction of a new power plant that even Israel approved, so now the Strip has electricity for only 2 – 3 hours per day, if that.

What is his motivation? Ever since the people of the Gaza Strip elected Hamas to govern them in 2007, there has been talk of reunification between Fatah and Hamas. The two groups were close to an agreement in 2014, but Israeli Prime Minister Benjamin Netanyahu was most displeased, and decided to bomb Gaza, partly as a result of this.

Now Mr. Abbas is attempting to cause so much misery in Gaza that the people will reject Hamas, and force that organization to agree to his terms, terms which are dictated by Israel.

The people of the West Bank, under Mr. Abbas, are completely unarmed, and have nothing but stones with which to defend themselves against the brutal, heavily-armed, apartheid Israeli regime. He wants to put Gazans in that same defenseless situation. As it is, Israeli terrorists – IDF soldiers and settlers – steal homes, land and anything they want, from the Palestinians. They arrest them without charge, hold them indefinitely without access to lawyers of family. Children are not immune to this unspeakable cruelty. Residents of the West Bank – men, women and children – are routinely killed by these same terrorists. IDF soldiers shoot them in the back with complete impunity. Settlers attack them, run over children with their cars, and forcefully evict residents from their homes with IDF soldier as silent and guilty witnesses, also with impunity.

The experts quoted above cite Israel as the main cause of this suffering, with Abbas as a secondary one. They said: “We call on all those involved to immediately resolve their issues, and not to further penalize the residents of Gaza for political disputes among elites. We call on the international community not to turn a blind eye to Gaza. And we call for a full and immediate end to the 10-year blockade and closure, which amounts to collective punishment contrary to international law.”

The United States proclaims its willingness to rush in to countries who have experienced disasters, natural or otherwise. Why, one might reasonably ask, does it ignore the abject suffering of the people of Gaza? Why does it not condemn Israel, as it condemns many other countries it sees oppressing an entire nation, or acting in opposition to international law?

There are several reasons for this, none of them good.

What is to happen? Will the entire population of Gaza starve to death, die of disease, or continue to live in abject despair?

That the international community has failed Palestine, and continues to do so, cannot be disputed. The barbaric cruelty with which Israel, and now Abbas, treat Palestine could not continue without the complete support of the United States. Although U.S. influence in the world community is waning, as other nations grow in economic strength and U.S. President Donald Trump embarrasses the U.S. on the global stage, it still controls Israel’s purse strings. A simple threat to withhold the $4 billion that it sends annually to that apartheid nation would alter its behavior, and bring freedom to the Palestinians.

But looking for courage and statesmanship among the U.S. elected so-called leaders is an exercise in futility. Those qualities simply don’t exist there. It is up to the rest of the world to recognize Palestine (those countries that still haven’t done so), and work independently and through the United Nations to see that Israel adheres to international law, and that the people of Palestine can live in safety and prosperity on their ancestral lands.

History will not look kindly on the barbaric treatment of Palestine in these supposedly ‘enlightened’ times.