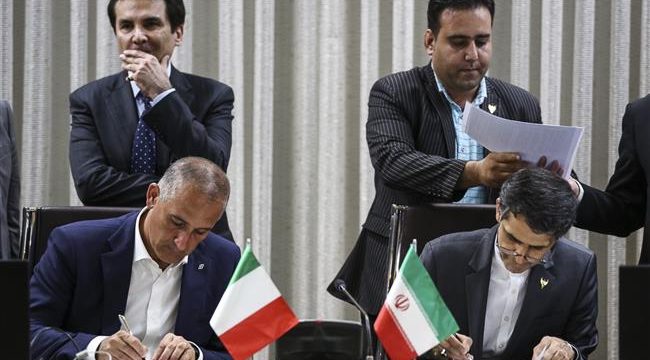 Press TV – Iran’s state railway company and its Italian counterpart have signed a deal worth 1.2 billion euros ($1.3 billion) to build a high-speed rail line between Iranian cities of Arak and Qom.

Renato Mazzoncini, CEO of Ferrovie dello Stato (FS), and head of the Islamic Republic of Iran Railways Saeed Mohammadzadeh oversaw the signing of the agreement in Tehran on Tuesday for the first stretch of a high-speed rail line which FS plans to build in Iran.

The other link is to be built between Tehran and Hamadan, with the overall deal worth 5 billion euros which Ferrovie initially signed under a framework agreement when former Italian prime minister Matteo Renzi visited Tehran with a delegation of business leaders last April.

The Italian group has also been connected with the planning and construction of a high-speed rail corridor between Tehran, Qom and Isfahan, and electrification of the rail link between Tehran and Tabriz on the way to the Caucasus and Turkey.

The deal signed on Tuesday foresees FS supplying assistance to the Iranian railways for both high-speed and conventional rail lines, including a complete program for training personnel.

Iran plans to invest $25 billion over the next 10 years in the modernization and expansion of its railway network, stretching out its railroad line to 25,000 kilometers by 2025 from under 15,000 kilometers now.

On Tuesday, Mohammadzadeh said one percent of oil and gas sales have been dedicated to rail development in Iran’s sixth development plan.

The country’s transport expansion plans include aligning with the regional rail networks in the Persian Gulf and the subcontinent to Central Asia.

In July 2015, France’s architectural firm AREP signed a $7 million deal for redevelopment of three main railway stations in Iran, marking a return of European companies to the country after the conclusion of a nuclear accord.

AREP, a subsidiary of France’s national railway company SNCF, will rebuild the stations in the Iranian capital, Tehran, as well as the holy cities of Mashhad and Qom which attract millions of pilgrims every year.