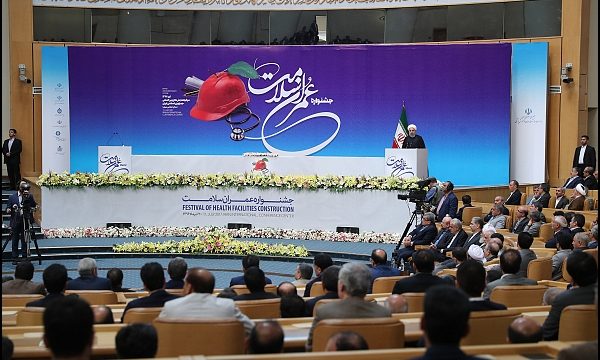 President Rouhani, addressing a health festival on Tuesday, said the administration would continue along its path with people’s support and the Leader’s guidance.

Pointing to the nuclear achievement in 2015, Rouhani said Iranian people, with power, unity, and support for diplomats, showed that they have the power to win against the plots of the great powers of the world.

“In every scene, if we want to win, we need the presence and approval of the people, the leadership of Ayatollah Khamenei, as well as the dedication of the officials and diplomats,” he noted.

We helped Iraqi people during their most difficult economic conditions; when we talk about helping the Iraqi people, some think that it is only about life sacrifice; however, there are those who supply the weapons for soldiers; the government, while under sanctions, paid for all the weapons that Iraq needed to fight ISIL; the government provides the money for Syrian needies, Rouhani added.

Pointing to Iran’s missile launch targeting terrorist positions in Syria, Rouhani said they are made by the government and the Ministry of Defense; it is the economic sector of the country that supplies the missiles.

Rouhani also pointed to the measures taken by the government to revive Lake Urmia; “If we did not take steps to save Lake Urmia, it would have been dried up more than a year ago; if we did not spend millions of dollars to survive the lake, if we did not open the water of dams towards the lake and if we did not reduce farming in the region, and at the same time not giving the farmers subsidies, any storm that would have occurred in the area would have become a storm of salt.”

He also referred to the developments in the country’s health system since 2013; “the health project was taken while Iran was experiencing difficult conditions, the unprecedented decline in oil prices in 2013, when the price of oil reached a third of its previous price, put a great pressure on Iran.