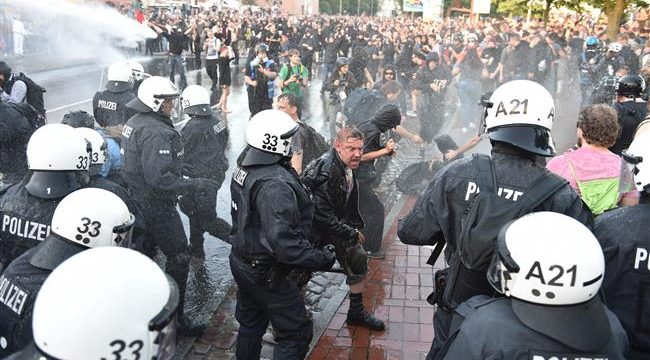 Press TV- New clashes have erupted in the German city of Hamburg ahead of a G20 summit, with angry demonstrators clashing with security forces and torching police cars.

Thousands of protesters from around Europe were pouring into Germany’s second largest city to join big demonstrations during the July 7-8 summit of leaders of the world’s 20 biggest economies.

Police expected around 100,000 protesters. Up to 20,000 police officers will be on duty to watch over the main demonstration, dubbed “Welcome to Hell” by the alliance of anti-capitalist groups who organized it.

Tens of thousands were expected to gather around the same time as Trump’s Air Force One jet is due to land in Hamburg.

Trump arrived in Hamburg on Thursday after spending several hours in Warsaw, Poland, where he delivered a speech and held a joint press conference with Poland’s president.

Trump’s unpopularity in Europe, as well as his apparent disregard for international treaties and human rights, have helped mobilize a massive protest movement this year.

“He [Trump] is the most disruptive and egotistical leader at the summit,” Turkish-German protester Fatima Cicek told Reuters.

“Trump is here to promote his own interests and those of the richest people in America,” said Cicek. “We are demanding more rights for the millions of people in Africa who have no roof over their heads.”

Protesters say the G20 is undemocratic and has failed to solve many of the issues threatening world peace, including violent conflicts, worsening inequality and climate change.

“It’s ridiculous that police say some of us are violent when starting tomorrow the leaders of the world’s largest weapons-exporting and importing nations will be arriving in our city,” said Stefan Hubert, a 32-year-old graphic designer who came to the protest on Wednesday with three friends.

Posters denouncing Trump and the G20 are plastered across the city. On Wednesday, the front page of a popular local newspaper, the Hamburger Morgenpost, referred to Trump as a “horror clown.”

In a Pew survey of people in 37 countries around the world published at the end of June, the most popular terms used to describe Trump were “arrogant,” “intolerant” and “dangerous.”