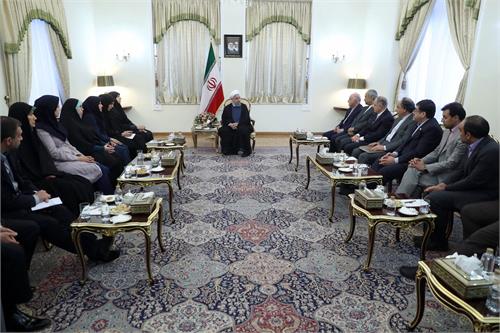 SHANA – Iranian President Hassan Rouhani says rearing skilled legal and technical experts is one of the achievements of signature of a deal between NIOC and a French-Iranian consortium.

Addressing a friendly meeting with Iranian Ministry of Petroleum experts and executives, Mr. Rouhani lauded the ministry’s performance in having the deal signed under the framework of the newly-developed oil contract model (also known as the Iran Petroleum Contract—IPC).

The Iranian president also thanked Iranian Minister of Petroleum Bijan Zangeneh and the young and skilled experts who were involved in signature of the deal.

The strategic deal was signed between NIOC and a consortium comprising France’s Total, China’s CNPC International and Petropars Company from Iran.

Total will operate the project with a 50.1% interest alongside Petropars (19.9%) and the CNPC (30%). The consortium is expected to produce around 50 million cubic meters of gas per day from the offshore reserves of SP. 11 project.

The energy carriers produced by the project will be valued at more than $54b considering the current prices.

The project is estimated to cost $4,879 which will be settled in a 10-year period.