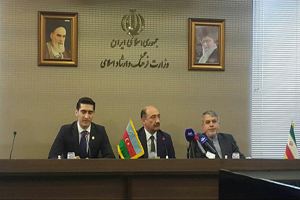 Iran, Azerbaijan cultural ties on the verge of a fundamental change

July 3, The Iran Project – Now is the best opportunity for Iran and the Republic of Azerbaijan to make a fundamental progress in their cultural relations, says the Iranian minister of culture and Islamic guidance on Monday.

In a meeting with Abulfas Garayev, Minister of Culture and Tourism of the Republic of Azerbaijan ahead of the opening of Azerbaijan’s Cultural Week in Iran, Reza Salehi-Amiri referred to Tehran-Baku’s cultural and historical commonalities as the  proper ground for the two countries to develop their cultural relations.

In today’s talks, we have reached initial agreements on cooperating in artistic, cinematic fields, holding joint book exhibitions, exchanging manuscripts, and enabling the cultural dialogue between the elites of the two countries, Salehi-Amiri added.

He also announced that Iran and Azerbaijan are planning to develop cooperation in the fields of music, theater, visual arts, books and publishing, and holding photo galleries, as well.

Elsewhere in his remarks, Iranian minister of culture and Islamic guidance pointed to the joint registration of Iran and Azerbaijan’s cultural and historical works at UNESCO, stressing that Tehran has no conflict with the Republic of Azerbaijan and regional countries, and we are all trying to jointly record cultural works.

Abulfas Garayev, for his part, touched upon Iran-Azerbaijan long standing cooperation, and stated that we are ready to expand relations and create new capacities.

He also emphasized that holding Azerbaijan’s cultural week in Iran will strengthen the relations between the two countries’ national libraries, museums and other cultural institutions and will be a bridge for the development of joint projects between Tehran and Baku on international level.