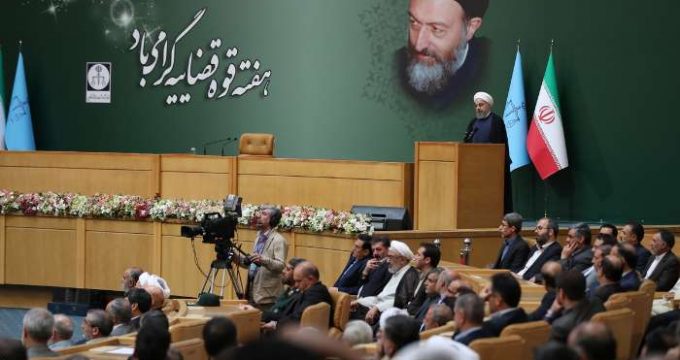 Rouhani: Iran should act so as to isolate US

Press TV- President Hassan Rouhani says Iran should exercise such foreign policy, which would rally the world behind it rather than behind the United States.

“We should not allow the US hand to expand and become powerful,” he said on Sunday at a meeting convened by Iran’s Judiciary.

“Our foreign policy should be of such effect that would make powers condemn the US and reproach it should it choose to stand against us,” he added.

Rouhani said, “Being revolutionary means isolating the United States, and speaking to the world in such a language that it would comprehend and accept our discourse.”

The president said the US has become isolated in the international community because of its insistence to impose new sanctions against the Islamic Republic in breach of a nuclear accord.

He proceeded to cite examples of Washington’s isolation on the world stage in its opposition against Iran.

Rouhani recalled a Thursday plenary meeting of the United Nations Security Council held to address the implementation of Iran’s nuclear deal with world powers. The event saw the UN, the European Union, and many major world countries all speaking appreciatively of Iran’s commitment to the nuclear deal, while the United States alone cried foul.

Also, the Financial Action Task Force (FATF), which fights money laundering, extended last month a freeze on some of its restrictions against Iran after verifying the Islamic Republic’s continued compliance with its directives. The decision came despite pressure from Washington not to do so.

“Does it suit us better for the US to remain alone on the international arena alongside Israel and Saudi Arabia [in its opposition to Iran], or should we act in such a way that would make the entire Europe, China, and Russia stand behind the United States?” he asked.

Rouhani said the enemy was seeking to rob the Middle East of peace, stability, and development so it could both sell its arms and have an excuse to intervene.

“But we are seeing peace and stability in the region, cutting the enemy’s hand short, and taking excuses away from it,” he said.