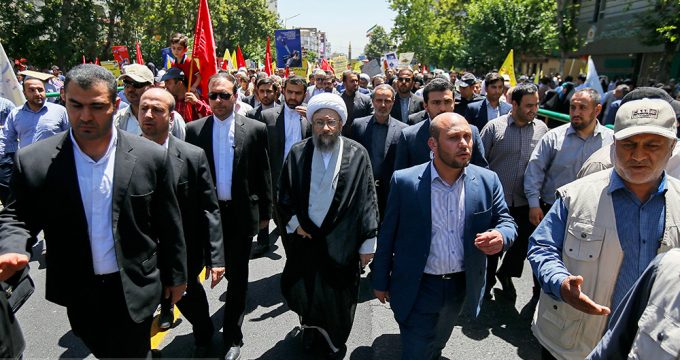 IRNA – Head of the Judicial System of Iran Ayatollah Sadeq Amoli Larijani said on Friday that the International Quds Day is not only a call for liberation of the holy Quds but also is a shout at the world hegemonic system.

The cleric made the remarks while speaking to reporters on the sidelines of the Quds Day rallies in Tehran.

Answering a question why the world hegemony tries to sink the Palestine cause into oblivion, Amoli Larijani said, “The issue of Palestinian, not just its 70 years of occupation, is an essential matter for the Islamic world. It is a matter of the hegemonic system and its support for that occupation.”

“The presence of people in the Quds Day rallies in millions indicates how powerful Islam is,” said the Judicial chief stressing that the shout at the world arrogance will continue until countries gain independence.

“Islamic countries will never yield to the US that is the same world arrogance,” he added.