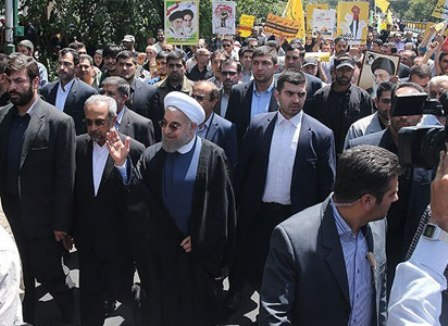 IRNA – President Hassan Rouhani said on Friday that the message of the International Quds Day is a message of ‘detestation of the occupying regime and support for the great and cultured nation of Palestine.’

Speaking to reporters on the sidelines of the Quds Day rallies in Tehran, President Rouhani said, “This year’s rallies have another message concerning two issues, one is the US which is always thinking of distorting other nations’ rights and the other is the presence of the Israeli-backed terrorists in the region.”

‘People want decisively to expel terrorists from the region,’ said the President.

Touching upon the recent anti-Iran measures made by the US Senate, the President said, “Attending the Quds Day demonstrations, Iranians came to tell the US that they would continue the path they have chosen.”

Millions of Iranians took to the streets on Friday throughout Iran to express their hatred towards the usurper regime of Israel for occupying the Palestinian lands and for atrocities against the defenseless people of Palestine.

The occasion is also marked by Muslim and non-Muslim people in other countries.

The day of anti-Zionist expression was first declared by late Imam Khomeini, the leader of Iran’s 1979 Islamic Revolution, who established the annual event in order to bring international attention to the Palestinian cause.

Iranians demonstrate their hatred for the Zionist occupiers of the Palestinian territories each year by attending huge rallies.