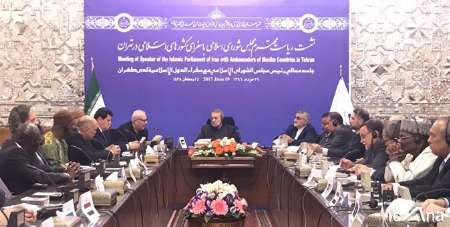 IRNA – Parliament Speaker Ali Larijani described certain Muslim countries’ attachment to Israel as a catastrophe and stain of disgrace, saying that Islamic Ummah should be sensitive towards destiny of Palestine and demonstrate their authority on World Qods Day.

In a meeting with ambassadors of the Islamic countries late on Monday held on the eve of World Qods Day (last Friday of Fasting month of Ramadan) in parliament, he appreciated Islamic countries’ solidarity with Iran over recent terrorist attacks inTehran, saying that Iran has for years been involved with the issue of terrorism which has implicated the entire over the recent years.

Noting that certain acts of terror stem from the Americans’ anger, Larijani said that Americans’ fury is understandable, as they have suffered heavy blows in the region and their defeats in Iraq and Syria were onerous.

Referring to a proposal by the Palestinian ambassador to organize joint meeting among the Islamic states’ Scholars, Larijani said that Iran did the best for holding the meeting which will help solve disputes.

“We try more to make the Saudis understand that their moves are detrimental to the Islamic Ummah, but they utter harsh words each day and confront the Muslim states, as they exercise force in Syria one day and attack Yemen the other day,” he said.

No independent country can be considered ‘backyard’ for another, Larijani warned, saying that they even create tensions in Bahrain and recently confronted Qatar.

Peaceful coexistence is at the center of Iran’s attention, he said, contending that forging solidarity and unity is Iran’s policy.

All Saudis measures are in the interest of Israel who wants to keep terrorists alive, Larijani said, warning Muslims not to fall in their traps.