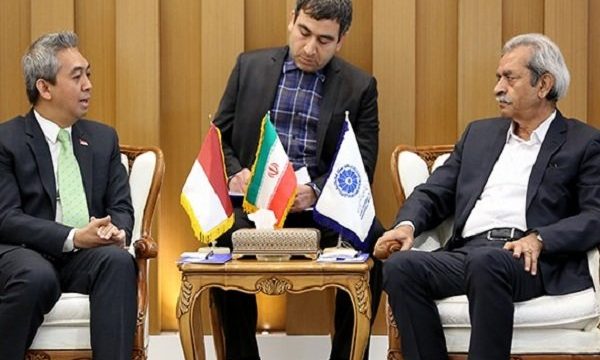 MNA – ICCIMA Head Shafei, while pointing to age-old trade ties between Tehran and Jakarta, described Indonesia as a major destination for Iranian businessmen.

Head of Iran Chamber of Commerce, Industries, Mines and Agriculture (ICCIMA) Gholamhossein Shafei made the remarks at a meeting with Indonesian Ambassador to Iran Octavino Alimudin.

Iran’s Sahfei pointed to considerable economic growth made by the Southeast Asian country saying “volume of trade turnover between Iran and Indonesia, which had reached a record high of two billion dollars in 2011, has declined to 500 million dollars due to sanctions.”

He however noted that implementation of the Joint Comprehensive Plan of Action (JCPOA) changed the image by creating a new positive atmosphere in economic transactions and bilateral investments.

The official touched upon good energy cooperation between the two parties and went on to say that Iran can act as a gateway to CIS countries for Indonesia while the Southeast country can link Iran to ASEAN in turn.

ICCIMA head pointed to a gap in communications between economic activists of Iran and Indonesia calling for exchange of more delegations in a bid to identify venues for collaboration.

The Indonesian ambassador, for his part, said holding of frequent sessions between traders of the two countries was a sign of determination to advance economic targets.

Octavino Alimudin said implementation of earlier agreements will lead to an upsurge in bilateral trade turnover between Tehran and Jakarta.

“An Indonesian oil company purchased 88 million dollars of crude last year from Iran while the figure will climb to 220 million dollars in the present year,” highlighted the official pointing to the rise in oil trade between the two side.

He further called for improvement of trade tariffs between Iran and Indonesia saying “a delegation is slated to visit Tehran soon in order to spot and remove barriers to commercial transactions.”

Alimudin confirmed the remarks made by Shafei who described Iran as a regional hub however noting that the competitive atmosphere created by other countries like Qatar also needs to be taken into account.

At the end of his remarks, ambassador of Indonesia to Tehran deemed industry, agriculture and mining as possible fields of cooperation between Iran and Indonesia.