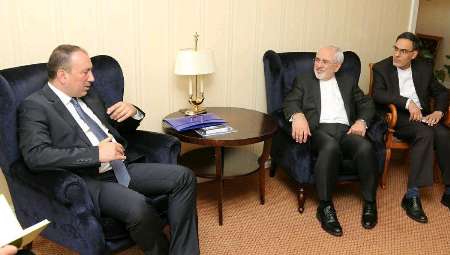 Zarif: Iran ready for cooperation with Bosnia to establish peace

IRNA – Foreign minister Mohammad Javad Zarif said on Tuesday that it is important for Iran to see stability and unity in Bosnia.

He made the remarks in meeting with his Bosnian counterpart Igor Crnadak on the sidelines of Oslo Forum opened on Tuesday.

Hailing thecurrent level of bilateral relations, he hoped that they would be promoted to higher levels.

Iran has excellent ties with all states, including Bosnia, he said.

Crnadak, for his part, said that since Bosnia has embassy in Qatar as well as nationals in Doha, the crisis broke out among the neighbors in Persian Gulf is of high importance for the Bosnian officials.

During the meeting, both officials discussed bilateral ties, regional developments and other issues of mutual concern.

The top Iranian diplomat also exchanged views on the Joint Comprehensive Plan of Action (JCPOA) with the High Representative of the European Union for Foreign Affairs and Security Policy Federica Mogherini at Oslo Grand Hotel.

Two-day Oslo Forum was also attended by former US Secretary of State John Kerry as well as number of foreign ministers from different countries.