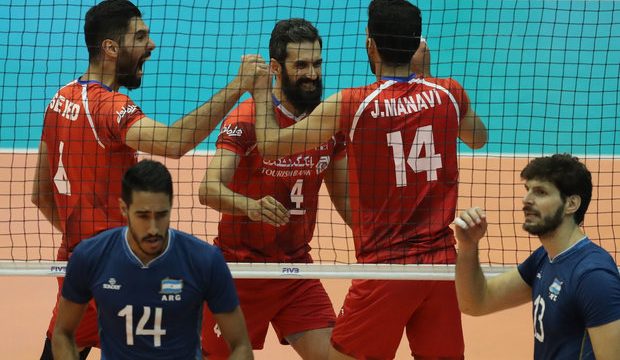 MNA – Iran’s volleyball squad breezed past Argentina in what was a neck-on-neck and challenging competition in the third week of 2017 FIVB World League.

Held in Tehran’s Azadi Sport Complex, the games saw Iranians pulling out a 3-2 victory over Argentinian rivals in their third and last encounter of the World League’s second week.

Manavinejad lived up to expectations as he earned 26 points to become the best scorer of the match. His teammate Milad Ebadipour also presented an impressing performance by collecting 22 points. The best scorer in the Argentinian outfit was Cristian Poglajen who secured as many points as Iran’s Ebadipoor.

The two teams were mainly exchanging points in the first set though Argentina took the lead at 16-12. Later, the two sides reached a 21-21 tie and they went point for point with neither side being inclined to give up. Accompanied by a huge crowd of fans, Iran managed to close the set at 29-27.

The second set mainly saw Iran taking the lead as the Persian volleyball players never lost their enthusiasm to score goals and finally pulled out a 25-20 win.

Argentinians came back to the match in the third set as they enjoyed a 22-17 advantage and finally closed the set at 25-20.

Eager to bring home three points of the match, Iran spared no effort in the fourth set though the South American team stormed ahead with a number successive attempts. Despite unswerving support of the fans, the set wrapped up 25-23 in favor of Argentina.

Iran rejoiced with a sweet victory after maintaining the upper hand in the tie-break which finished at 15-11.

Host Iran had previously defeated Belgium (3-2) and lost to Serbia (3-1) in the second week of the 2017 FIVB World League clash.

National volleyball team of Iran is slated to take up US rivals on June 15 in Poland.