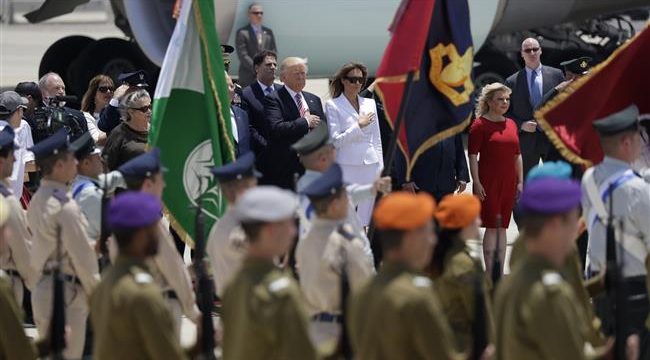 The Guardian |Observer editorial: One of the key questions posed by Donald Trump’s presidency is whether you can believe what he says and even whether he believes it himself. This dilemma was evident last week during his visits to the Middle East and Europe. In a speech in Saudi Arabia, Trump dropped the anti-Islam rhetoric that so disfigured his 2016 election campaign. There was no mention of his travel ban on Muslims, a headline policy that remains blocked in the US courts. His trademark phrase – “radical Islamic terrorism” – that gratuitously smears an entire religion with the misdeeds of a violent fringe, was absent. Instead, Trump made nice. Islam was “one of the world’s great faiths”, he said. He wanted a partnership between the US and the Muslim world built on “tolerance and respect for each other”.

Why this sudden change of tune? To say anything else at a heads of state summit on Arab soil would indeed have been crass, even by Trump’s lax standards. It would also have required a degree of personal courage of which he has never been suspected. The most convincing explanation is also the most disturbing: that Trump is more thoroughly at ease among monarchs, dictators and unelected autocrats who share his contempt for human rights, free expression and a free press. The democratically chosen leaders of the EU and Nato, whom he met later in the week, are for him less congenial companions. They have a legitimacy he finds threatening. Trump’s rude, ignorant public berating of the leaders of France and Germany over Nato budget shortfalls jarred badly after his fawning and toadying in the Gulf.

Trump’s Saudi sojourn, which preceded a brief visit to Israel, provided some indications about his approach on international issues, if indeed they can be trusted. It is becoming plain, for example, that we are rapidly returning to the pre-Obama practice of simplistically dividing the world into “good guys” and “bad guys”. George W Bush described the latter as “evil-doers”. Trump calls them “losers”. This playground terminology is applied to countries as well as individuals. Thus North Korea, for example, is once again threatened and reviled as a rogue state. In contrast, the Saudi regime, despite its egregious human rights abuses, institutional oppression of women, tolerance for and funding of anti-western ideologies and rejection of democratic norms, gets Trump’s seal of approval, marked by a multibillion dollar arms deal.