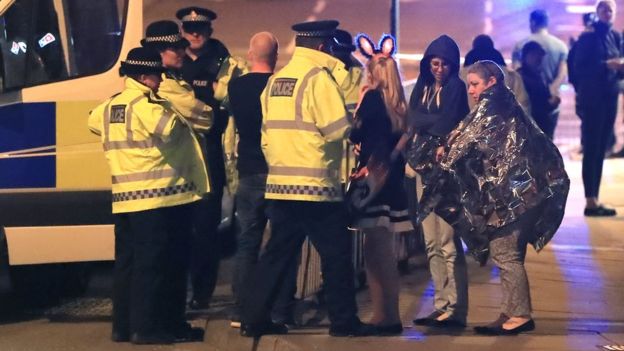 American Herald Tribune | David Macilwain: Following the Manchester suicide bombing, one wonders just what is necessary before Western media commentators and journalists join the dots – to make a true picture of the terrorist monster unleashed on the world by their own governments.

It is a question many people were asking only a day earlier, as those media blandly reported the demented ravings of the US, Saudi and Israeli leaders about the global terrorist threat posed by Iran. Surely there must have been some misunderstanding! Even though some commentators noticed a few of the Emperor’s clothes were missing, or a little inappropriate (black-flag underwear?) none challenged the ludicrous ideas that Iran was a global sponsor of terrorism, and “still” sought to develop nuclear weapons.

For Iranians however, and their friends and allies, events of the last weeks have stripped bare both the “Emperor” and his terrorist partners, and revealed the depths of deceit in the West’s fight against the “Islamic State”. The Libyan link in this chain of covert war – the LIFG connections of the Manchester bomber – has finally and unexpectedly rounded out the picture.

Silence over the collapsed Libyan state is just another of the Western media’s failings, though silence might be preferable to further repetition of the old lies about a “Revolution against the dictator Qadhafi”, followed by tribal warfare, and now compounded by the supposed presence of “Islamic State”.  What has actually been happening in Libya, both since 2011 and dating back to the ‘90s has been cleverly or unwittingly concealed from Western audiences by their media and leaders in what looks like a complex game of diversions and distractions, white lies and black lies.

As revealed recently by Tony Cartalucci, and further dissected by Thierry Meyssan, the network of alliances and collaboration between Libyan Salafist groups and US and UK intelligence services has played a central role in NATO’s campaign against the “resistance” states, including Libya, Syria, Iran and Shia Lebanon. The failure of Western commentators and analysts to notice this “conspiracy” and consequently adjust their viewpoint has enabled grossly criminal behaviour to continue without public opposition. The exposing of the “Libyan connection” – by US intelligence agencies – threatens to change this, and the extreme reaction from the UK to the US leaking of the Manchester bomber’s identity – cutting communications between their intelligence services for 24 hours – indicates just who is threatened by it.

It was former MI5 agent David Shayler and his partner Annie Machon who first made public the co-operation between MI6 and anti-Qadhafi Salafist in Libya in the 1990s. MI6 helped in the formation of the “Libyan Islamic Fighting Group” from Afghanistan mujahideen/Al Qaeda veterans, with the express aim of assassinating the Libyan leader. Following the plot’s failure, and changing attitudes to Qadhafi in the UK, marked later by Tony Blair’s much publicised rapprochement with him, the tables were turned on several key leaders. Most notable, and now notorious, was Abdulhakim Belhaj, who was delivered back to Tripoli by the CIA/MI6 and imprisoned for six years.

During this period, up until the “Arab Spring”, other members of the LIFG who were resettled in the UK around 1998 – in the Manchester suburb where they were rediscovered last week – became rather persona non grata and some were placed on control orders as the LIFG was classified as a terrorist group.

However… a big however – when US, UK and French leaders decided in 2011 that they could no longer live with Moammar Qadhafi – who now supported his traditional secular Arab Nationalist allies in Syria – the UK leaders again found a use for their Libyan friends in Manchester, as leaders of the ‘Revolutionary forces’ against the Libyan government.

But of course it didn’t end there – in Libya – and hasn’t ended yet, either in Libya or in Syria, which is where many Libyan militants soon went.

The story of the ‘rat line’, from Eastern Libya to Turkey and onto Syria, was first prominently exposed by Seymour Hersh in early 2014, but observers in Turkey had noticed the presence of many Libyans in Turkey back in 2012, as they waited to join the violent insurgency against the Assad government in Syria. Amongst these fighters – or terrorists if you prefer – was Belhaj, who the CIA found was someone they could work with in their operation to “smuggle” militant jihadists and weapons from Libya to Syria. The US “consulate” in Benghazi seems to have been the centre of operations for the rat line, and disputes between different terrorist groups including the LIFG, and the CIA were likely the cause of the well-publicised attack and killing of the US ambassador Christopher Stevens.

Abdulhakim Belhaj meanwhile had returned to Libya, and somehow became the head of military forces in the Libyan transitional government. Rather contradictorily he had also launched legal action against the UK government for their years of action against him, including rendition and alleged torture by Libyan Intelligence on behalf of MI5. Compounding the picture of this terrorist-in-a-tie were claims last year that Belhaj was now the leader of Islamic State in Libya…

Before getting to the crucial questions on the identity of the Manchester bomber and his relatives, there is one other little thing to mention – Clinton’s emails. As is the habit with Western mainstream media, their focus has been almost entirely on aspects of this story which are relatively unimportant – such as Clinton’s use of a private server, and a witch-hunt over how the emails were leaked. It is of course the content of those emails that is the real story, and what they tell us about Clinton’s direct role in supporting the terrorist groups in Syria. Along with David Petraeus, who just happened to be in Tripoli when the Benghazi consulate was attacked, Clinton could hardly have been ignorant of the whole rat-line operation, even as her President Obama publicly debated whether to arm the “moderate opposition” in Syria.

But then Belhaj and his Libyan terrorist mates were not exactly moderate. Once Al Qaeda and now “Islamic State”.

It is against this background that we discover some shocking truths about the Manchester bomber, Salman Abedi – this young man who “appears to have become radicalised in Syria”.

In 2011, when MI5 facilitated the passage to Libya of LIFG members from Manchester, Salman’s father Ramadan Abedi evidently took his sons back to Tripoli to join the armed insurgents and learn how to kill people. Ramadan already had experience doing this in the ‘90s alongside Belhaj, as despite failing to kill Qadhafi there were many other innocent victims of the MI6 enabled LIFG “contras”.

In the six years since, Salman Abedi evidently went to fight in Syria, with Al Qaeda or “IS”. Perhaps he even went there with the CIA’s “rats”.  So it could be said that joining the dots on the Manchester bombing gives us quite a good picture of a Western mercenary rat, whether it’s a white rat or a black rat…