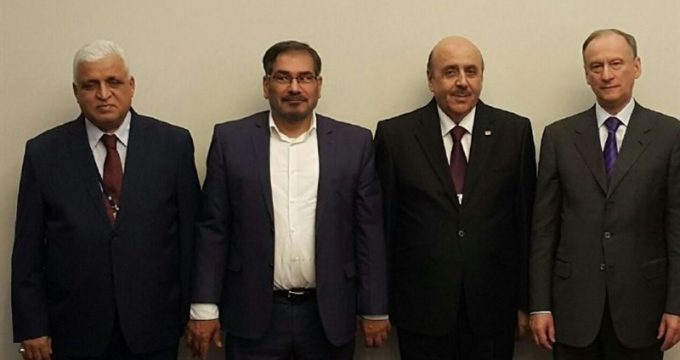 Tasnim – Top security officials from Iran, Russia, Iraq and Syria denounced as “inflammatory and unconstructive” the remarks that certain participants made in a recent summit of Arab leaders and the US president in Riyadh.

The senior national security officials from the four countries held a meeting in Zavidovo, a village northwest of the Russian capital of Moscow, on Tuesday night, to discuss regional developments and coordinate efforts in the fight against terrorism.

In separate comments at the meeting, the four top officials elaborated on plans for closer cooperation among the coalition members in the fight against terrorism in the region, with all highlighting the constructive role that the pro-Syrian coalition plays in addressing crises originating from terrorism and in contributing to restoration of peace and stability to the region.

They also denounced the provocative and unconstructive stances adopted during the recent summit in Saudi Arabia, saying it would open the door for “increased instability and tension” in the region.

The four officials also slammed as “fabricated and propagandistic” the ineffectual coalitions that Western countries and certain “infamous state sponsors of terrorism” have formed for an alleged war against terrorist groups.

The officials in the Zavidovo meeting further stressed the need for continued cooperation between Iran, Russia and Turkey to implement the decisions made in the Astana talks for peace in Syria, help hold a ceasefire in the Arab state, and maintain an agreement on establishment of de-escalation zones in the war-torn country.

Back in May, Iran, Russia and Turkey agreed on a proposal to establish four de-escalation zones in Syria, following diplomatic talks in the Kazakh city of Astana.

The largest of the four zones is in northern Syria and includes Idlib province and adjoining districts of Latakia, Aleppo and Hama with a total population of over 1 million.

The zones are intended to halt conflicts in specific areas between Syrian forces and rebels, and would potentially be policed by foreign troops.

Syria has been gripped by civil war since March 2011 with various terrorist groups, including Daesh (also known as ISIS or ISIL), controlling parts of it.

The conflict has claimed the lives of over 470,000 people, injured 1.9 million others, and displaced nearly half of the country’s pre-war population of about 23 million within or beyond its borders.