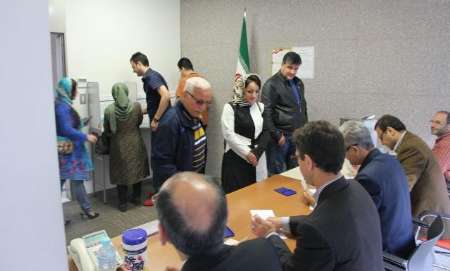 A look at elections in Iran versus other Persian Gulf states

Press TV – The Persian Gulf’s coastline accommodates eight countries, Iran and seven Arab states. Here is a look at the differences between the electoral systems in the Islamic Republic and the other countries that share the littoral stretch with it.

In the Islamic Republic, the Leader, which is the highest authority in the country, is appointed by the Assembly of Experts, an 88-member body, which also oversees the Leader’s work. The Assembly, itself, has its members elected by the people.

The country also holds regular Legislative, Parliamentary, and City and Village Council elections to respectively elect the country’s chief executive, members of the parliament, and members of the councils tasked with running urban and rural affairs.

The kingdom is an absolute monarchy, where the monarch enjoys unlimited authority, except for that he must submit to the Saudi version of “religious law.” Though not always, absolute monarchy is hereditary as is the case in the kingdom.

The king is also the head of government, where members of the ruling Al Saudi family prevail.

The members of the Saudi Consultative Assembly or Parliament are appointed by royal decree.

The only popular election in the country is that of municipal elections, which had been excluding women until 2015.

Oman is likewise an absolute hereditary monarchy, where the Sultan heads both the state and the government. The Sultan chooses the country’s cabinet.

The Sultan also appoints members of the Consultative Assembly or the Parliament by choosing from among the names sent by local caucuses in the country’s dozens-strong districts.

The island is a constitutional monarchy, where the king’s authority is bound by the constitution.

The country held elections in 1970s to elect a Constituent Assembly that drafted the constitution.

The constitution has enshrined the hereditary leadership of the Al Khalifa family and called for the establishment of the National Assembly or Parliament. Only half of the legislature’s members are elected by popular vote, the rest being handpicked by the monarch.

The country has dissolved its biggest political opposition party of al-Wefaq, and been cracking down on its supporters in what is seen as a major deterrent against popular political participation.

Iraq has the members of its parliament elected by its people. The parliament, in turn, elects the president and the prime minister, who heads the country’s cabinet.

The position of Kuwait’s emir has been passing on, in the Al Sabah family. The emir appoints the prime minister, who, in turn, appoints ministers.

The country, however, elects its own parliament members, who are empowered to even overrule the emir’s decrees or remove ministers.

The Emirate’s political constellation is formed by an absolute monarchical rule, where Abu Dhabi’s ruler is the president and head of state, and Dubai’s ruler the prime minister.

People hold a say when it comes to electing half of the members of the Federal National Council or the Emirati federal authority.

The Qatari political system is seen as probably the closest to that of Saudi Arabia. Qatar is an absolute monarchy only responsive to “religious law.”

It was supposed to hold legislative elections in 2013, but has postponed it until at least 2019.