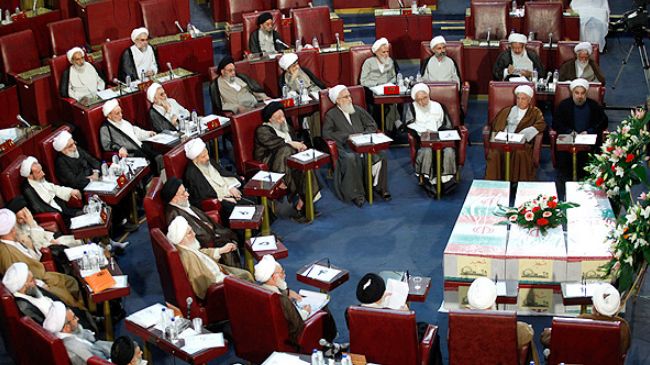 Tasnim – Assembly of Experts, a high-ranking body in Iran electing leader of the Islamic Revolution, called on the candidates seeking presidency to pay regard to the interests of the Establishment in their campaigns and avoid the moves that may cause tension.

In a statement on Tuesday, members of the Assembly of Experts asked the five men running for president to consider the interests of the Establishment and safeguard the country’s dignity, independence, security and calm in electioneering.

It also recommended the candidates to avoid tensions and discord, push for resolving the country’s economic problems, give priority to improving the livelihood of people, devise plans to create jobs, and tackle recession, unemployment, high costs and social gaps.

The Assembly of Experts includes 88 clerics who are directly elected by people for an eight-year term. It holds biannual meetings to appoint a new chairman.

The assembly’s statement came three days before the 12th presidential election in Iran.

Mohammad Baqer Qalibaf, a figure in the principlist political faction who struggled to drum up support for his presidential campaign by hammering President Rouhani, dropped out of race on Monday in favor of Raisi.

Iran presidential election 2017, Iran’s Assembly of Experts May 16, 2017
Iranian expatriates in Russia can vote in 4 cities: Embassy
Over 60 electoral ‘violations’ in run-up to Iran vote – judiciary