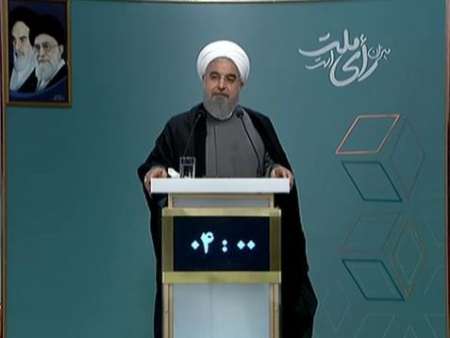 Polls put Rouhani in lead with one week to go

Al-Monitor | Matt Dabrowski: Incumbent Hassan Rouhani maintains his lead in the run-up to Iran’s May 19 presidential election. Two new election surveys show him ahead, going into the third and final nationally televised debate and with less than a week to go before the vote.

A telephone survey conducted May 7-8 by the Iranian Students Polling Agency (ISPA) had Rouhani at 42% of the vote, cleric Ebrahim Raisi at 27%, Tehran Mayor Mohammad Bagher Ghalibaf at 25%, First Vice President Eshaq Jahangiri at 3%, former Culture Minister Mostafa Mirsalim at 3%, and former Mines and Industries Minister Mostafa Hashemi-Taba at 2%. No undecided vote was reported, nor was a sample size or margin of error. ISPA is a longtime public opinion research agency in Tehran.

A telephone survey conducted May 8-11 by International Perspectives on Public Opinion (IPPO) had Rouhani at 29%, Ghalibaf at 12%, Raisi at 11%, and Jahangiri, Mirsalim and Hashemi-Taba at 1% or less. The survey had undecided voters at 28%, and a further 20% declined to answer or gave other responses.