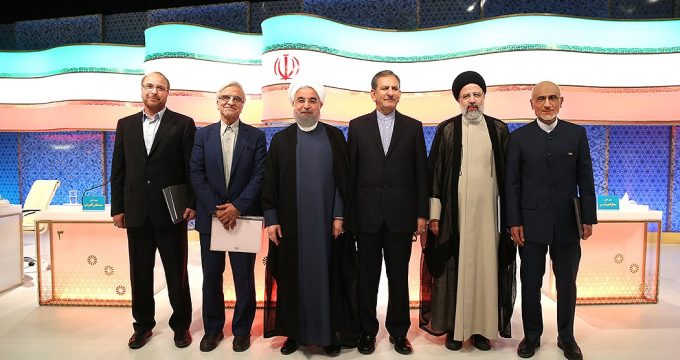 In the course of the debate, the challengers that included incumbent President Hassan Rouhani, First Vice President Es’haq Jahangiri, Tehran Mayor Mohammad-Baqer Qalibaf, member of the Expediency Council Mostafa Mirsalim, Seyyed Ebrahim Raeisi, the current custodian of the Holy Shrine of Imam Reza (PBUH) in the northeastern city of Mashhad and former vice president Mostafa Hashemitaba elaborated on their economic plans and agendas as they campaigned for the May 19 vote.

The debate began in earnest with Jahangiri drawn first to answer a question about his plans to fight smuggling and reduce imports. He said the smuggling of commodities undermines domestic production and diverts the course of economy from the right course. He added that the oversight in dealing with the smuggling of goods has dealt severe blows to the country’s economy.

Presidential candidates took turns to express their views on Jahangiri’s remarks with Raeisi saying that the backbone of his anti-smuggling plan is based on extensive research conducted in universities. He added that the 11th administration was not serious in dealing with the smuggling of goods. Hashemitaba said that 114 official docks have been used to smuggle goods into country.

Qalibaf said prevention is the first step in fighting goods smuggling and claiming that some ministers are engaged in illegal import of commodities to the country.

Rouhani said the first concern with regard to the smuggling is its root causes. He added that the private sector’s economic activities must be encouraged to reduce smuggling and emphasized that border villages must start producing and exporting goods in order to curb smuggling.

Jahangiri retook the podium to answer the candidates’ questions and said the judiciary has appeared weak in fighting the smuggling of goods.

He said Raeisi and Qalibaf should come clean on their records and should not be afraid to talks about them. He noted that the two should explained what they did to fight smuggling when they were in charge with Raeisi as deputy judiciary chief and Qalibaf as head of the anti-smuggling headquarters.

He said some $25 billion of goods used to be smuggled into the country when the incumbent government took the helm but it managed to cut to $25 billion.

He told Raeisi to be ashamed of what the previous government, which he supported, did rather than being critical.

Jahangiri added that the current administration has taken serious measures to stop astronomical salaries. The Iranian first vice president said Tehran Municipality has not come clean on the selling of underpriced properties to certain people.

Jahangiri accused Qalibaf of “selling out” public properties worth 22,000 billion rails. He said the mayor blocked a parliamentary investigation into the scandal by lobbying.

He also said once already the country’s affairs were dealt with sloganism which pushed the country to the verge of collapse. He said those who did so to the country now have their representatives in the campaign team of some of the conservative candidates.

Mirsalim, the second hopeful taking to the podium, was asked to outline his approaches to boosting exports and reducing the country’s dependence on oil.

He said he plans to reduce crude oil sales in favor of exporting domestic products. He added that the sales of crude oil have made the country more dependent on other countries and added that exports must be encouraged to make up for expensive production inside the country.

The presidential contestants took turns to express their views on Mirsalim’s remarks with Rouhani saying that his administration has managed to open Iran’s export markets through the signing and implementation of the landmark 2015 nuclear deal.

He added that if the country does not exploit shared energy fields, the neighboring states will extract their oil reserves.

Jahangiri said the 11th administration has considerably reduced the export of raw materials.

Raeisi said the building of refineries in various provinces would reduce crude oil sales and criticized that no measure has been carried out in this regard. He added that there is currently no serious will to fight the smuggling of goods in the country.

Hashemitaba said export-oriented domestic production would help reduce the smuggling of goods. He said building refineries in different parts of the country is not economical.

Qalibaf said people with vested interest in smuggling have prevented solving the problem.

Mirsalim retook the podium to respond to the candidates’ questions, saying Iran must work with its neighboring countries to safeguard shared energy fields.

Rouhani, the third candidate at the podium, used his four-minute time to express his plans to solve the problems in the country’s banking system. He said Iran’s banking system needs fundamental reforms. The incumbent president added that his administration has managed to double the capital of state-run banks to get more active in the economic sector.

The presidential candidates took turns to express their views on Rouhani’s remarks with Jahangiri saying the previous administration had brought about the depletion of bank resources. He added that the 11th administration is implementing the development plan for banks to help them become active in production.

Raeisi said the 11th administration blames its predecessor for all of the problems. Raeisi added that the current administration has left the country in limbo for four years.

Rouhani hit back by saying that Raeisi has time and again called for a debate between “me and my predecessor”.

“I suggest that it would be better to hold a debate between me and Mr. Raeisi himself with the presence of the press because most of the cabinet members of the former government are active in Raeisi’s camp”.

Rouhani slammed Qalibaf for hurling verbal abuse against him and Jahangiri by calling them “rude” and “liar”.  He said this is not a new thing as Qalibaf did mud slinging against the government over the past four years using his media outlets.

Hashemitaba said the banking problems were handed down to the 11th administration by its predecessor. Qalibaf said the administration of President Rouhani has failed in properly supervising and managing banks and added that liquidity has tripled under the present administration.

Mirsalim said the banking system is currently based on usury, adding that the 11th administration is required to be more serious in dealing with the banking problems.

Rouhani retook to the podium to use his five-minute time to answer the debate question. He asked why the judiciary has not dealt with financial problems caused by the previous administration.

Rouhani asked Raeisi what he did while he was the head of the General Inspection Office to address embezzlements in the Oil Ministry and the Social Security Organization. He said Raeisi failed to address those scandals.

He said Raeisi and Qalibaf keep saying that they would give out cash subsidy to people and create jobs but they don’t say the resources for their plans.

The incumbent president said his administration have greatly reduced bank arrears and put banks back to the right course.

Rouhani noted that the media should be allowed to speak out and they should not be banned when they reveal scandals like the one in the municipality.

Hashemitaba, the fourth candidate taking to the podium, answered a debate question about his plans for prosperity of domestic production. He said the modernization of the agriculture sector should be the first step for bringing prosperity to domestic production. He said the export-oriented production, investment attraction and bank reforms are other needed steps in this regard and added that domestic capital must be used to promote Iran’s exports.

The presidential hopefuls took turn to express their views about Hashemitaba’s comments with Qalibaf saying the current production problems are rooted in the mismanagement of the country’s affairs. Mirsalim said many production problems are a result of the administration’s inattention to the economic recession. Rouhani said production prosperity needs further investment and a proper use of technology. Jahangiri said the private sector is the key to production and investment in the country and added that the 11th administration has succeeded in bringing stability back to the Iranian economy. Raeisi said 250,000 businesses shut down under the current administration.

Hashemitaba retook to the podium to use his five-minute time to give responses to the candidates’ question, saying the country’s industry will fail if it is not export-oriented. He added that many businesses shut down due to the worn-out technology used in them. He said some media outlets undermine any step taken to attract foreign investment.

As the fifth candidate taking to the podium, Raeisi explained his plans for the implementation of the subsidies law. He said the 11th administration’s policies have led to increasing poverty inside the country and added that subsidies handed out to lower deciles must increase.

The presidential contenders took turns to express their views on Raeisi’s remarks with Hashemitaba, urged Raeisi to explain how he is going to increase cash subsidy by threefold. He said if Raeisi does so, his government would draw 17 times more from their pockets.

Qalibaf said entrepreneurs were under tremendous pressure as a result of the country’s economic problems. Mirsalim said domestic production has been damaged over the past four years. Rouhani said some people are willing to revive methods used by the previous administration and urged the continuation of cash handouts and the implementation of social security plan. Jahangiri said the existing problems are a result of wrong policies adopted by the previous administration and added that increasing cash handouts would destroy the country’s economy.

Raeisi retook to the podium to answer the candidates’ questions in five minutes. He expressed his readiness to hold a one-on-one debate with Rouhani on his wrong policies.

Qalibaf took to the podium to answer a question in four minutes about his plans for boosting the country’s economic growth. He said Iran is facing full-fledged economic crisis and added that President Rouhani’s administration has not been successful in solving the country’s economic crisis. The mayor of Tehran said tax evasion in Iran amounts to 40 percent, adding that the creation of job opportunities is the most important step for boosting the economic growth.

The presidential hopefuls took turns to express their views on Qalibaf’s remarks with Mirsalim saying the 11th administration has failed to observe the principles of Economy of Resistance. Rouhani said Qalibaf must explain his plans for achieving 26 percent economic growth rate.

Jahangiri said the candidates must explain if they are capable of attracting foreign investment. Raeisi said oil accounts for the lion’s share of national seven percent economic growth rate. Hashemitaba also made comments on Qalibaf’s comments. Jahangiri said that his conservative rivals, Raeisi and Qalibaf, lacked any expertise in diplomacy and will fail to attract foreign investment.

The mayor of Tehran retook to the podium to answer the debate questions, vowing that his administration will certainly create five million jobs, including 1.5 million jobs for rural districts, if elected. Qalibaf said prosperity of the housing sector and tourism are among his main plans and added that it is possible to increase the country’s revenue 2.5 times.