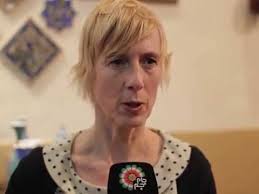 IRNA – A Spanish writer who published a book on her visit to Iran has said that the first thing one can notice while visiting the country is the falsehood of all allegations made against Iran and Iranians from outside.

Patricia Almarcegui, writer and lecturer in Comparative Literature, gives a narration of her 2005 visit to Iran in her book ‘Escuchar Irán’ (Hear Iran) which was published in 2016.

“Iranians are very ‘kind, cultured and hospitable’ and one can easily see high levels of culture, such as poetry and music in the Iranian geranial public,” Almarcegui said in a recent interview with Diario de Sevilla.es, a Spanish news website.

“You only need to go to Hafez’ Tomb in Shiraz, to see families reading Hafez’ poems by heart in his memory,” she said.

Hafez (1315-1390) was a 14th-century Iranian poet, best known for his poems that can be described as “antinomian.” He was a spiritual mystic poet. His collected works are regarded as a pinnacle of Persian literature and are to be found in the homes of most people in the Persian speaking world (mostly Afghanistan and Iran), who learn his poems by heart and still use them as proverbs and sayings.

More in her interview with Diario de Sevilla, the Spanish writer referred to the great abilities acquired by the Iranian academic youth. She noted that she was surprised when she found out that many of them had fairly a good knowledge about Spain.

The Spanish writer added that being among Iranians is as normal as being among people of any other Western country.

She said that she is optimistic about the future of Iran as she has witnessed noticeable political changes in the society in her both consecutive trips to Iran (some years apart).

Accounting for the women’s situation in Iran, she said that women enjoy a lot of chances and have also tried many more by themselves in a way that if, on your trip to Iran, you look for someone who knows English or French, you will definitely find a woman.

It can’t be said that women and men are equal in Iran, but this is the case in many other countries and is not limited only to Iran, Almarcegui stressed.

Referring to the great state of security in Iran and the considerable respect Iranians hold for a foreign woman travelling alone, the Spanish writer said it is a privilege to be an unaccompanied foreign woman in Iran since, based on that, you will receive any kind of help.