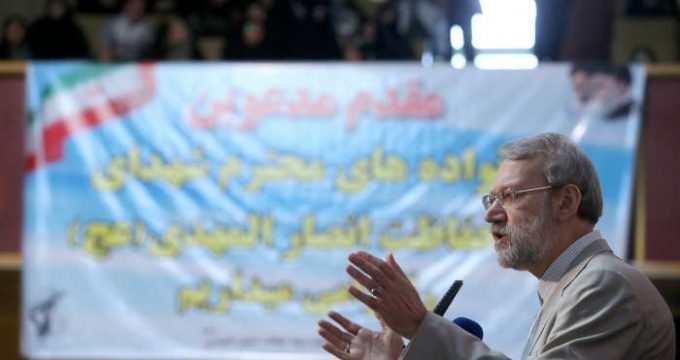 FNA – Iranian Parliament Speaker Ali Larijani underlined that the Islamic Revolution Guards Corps (IRGC) is the most powerful force in the Middle-East region.

“I am certain that today the IRGC is the most powerful decisive power in the Middle-East,” Larijani said, addressing a forum in Tehran on Thursday.

He also stressed that the IRGC also enjoys good intelligence superiority too.

Meantime, Larijani said that Tehran doesn’t intend to make any aggression against any country but if they take any action against Iran, they should know that a hard rival will confront them.

His remarks came after IRGC Top Commander Major General Mohammad Ali Jafari stressed that plots hatched by Washington and its allies against Iran and the Islamic Revolution have all fallen flat.

“Today, with God’s help, the enemies, headed by the US, Israel and the hated and anti-Islam Saudi Arabia, have all failed in their plots against the Islamic Revolution,” General Jafari said last Sunday.

He added that failures of these countries in Syria, Iraq and Yemen have all resulted from the spread of the Iranian nation’s spirit of resistance to other countries.

In relevant comments last year, General Jafari underlined that the IRGC will stand strong to never allow the US to penetrate into Iran.

“Rest assured that the root of the evil tree which wants the US policies to penetrate the country will be cut and the Islamic Revolution will go through the third stage of its development through the supports and guidelines of the Commander-in-Chief of Iran’s Armed Forces (Ayatollah Seyed Ali Khamenei),” General Jafari said.

The top commander underlined that the IRGC will not allow the US to have its vicious plots implemented in Iran.

Also in 2016, General Jafari underlined the Iranian Armed Forces’ preparedness to repel any threat, and said Iran is the most secure country.

The Iranian military and security forces have well been able to contain foreign threats as the country enjoys security and power despite the existing dangers in both the world and the region, General Jafari said.

Iran’s 1979 Islamic Revolution is spreading beyond the borders, the IRGC commander said.

He further underlined the importance of keeping military and defense forces prepared, and said that Iran has turned into a role model of security for other countries and it is the most secure country that no one is able to do anything against its security.