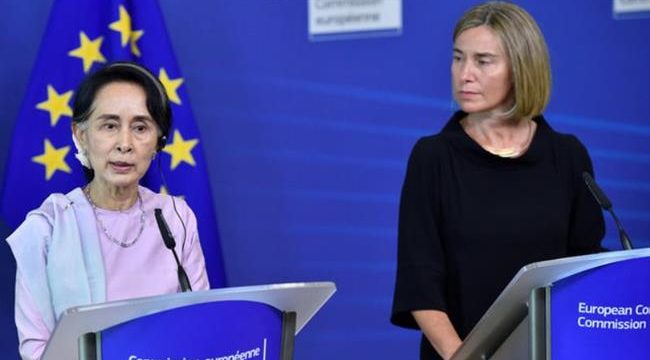 Suu Kyi said in a news conference with the European Union foreign policy chief Federica Mogherini in Brussels that she did not agree with a relevant resolution adopted by the UN Human Rights Council in March.

The resolution called for sending an international fact-finding mission to investigate the allegations in Rakhine and urged the Myanmar government to cooperate.

“We have disassociated ourselves from the resolution because we do not think that the resolution is in keeping with what is actually happening on the ground,” she said on Tuesday.

Suu Kyi said she would only accept recommendations from a separate advisory commission led by former UN chief Kofi Annan. Any other input would “divide” communities, she added.

Mogherini, however, supported the international mission, saying the agreed resolution would help clear up uncertainty about allegations of killings, torture and rape against Rohingya Muslims.

Since October 2016, Myanmar’s forces have been carrying out a military crackdown in Rakhine State, where the Rohingya community is mainly based, following a raid on a police post that was blamed on Rohingya-linked militants.

According to a report issued by the UN last month, Myanmar’s forces have committed mass killings and gang rapes against members of the community. UN investigators interviewed 220 Rohingya among 75,000, who have fled to Bangladesh since October 2016.

The report warned that the killings, gang rapes of Rohingya Muslims have been occurring in a campaign that “very likely” amounts to crimes against humanity and possibly ethnic cleansing. Suu Kyi, however, rejected the report.

Hundreds of Rohingya have been killed and tens of thousands have been forced from their homes to live in squalid camps in dire conditions in Myanmar, Thailand, Malaysia and Indonesia.

The government denies full citizenship to the 1.1 million-strong population, branding them illegal immigrants from Bangladesh. Rohingya Muslims are believed to be a community of ancient lineage in Myanmar.

According to the UN, the Rohingya Muslims are one of the most persecuted minorities in the world.