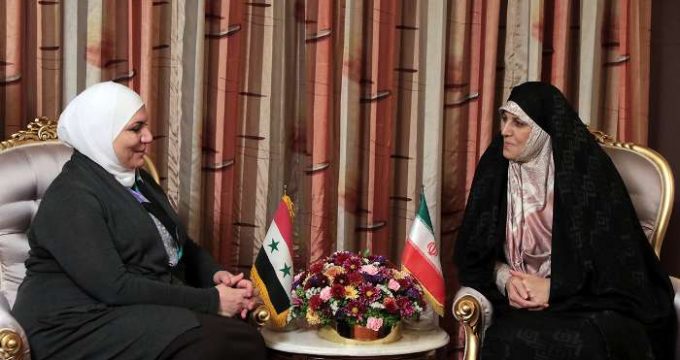 IRNA -Vice-President for Women and Family Affairs Shahindokht Molaverdi expressed hope that meetings focused on women would lead to solidarity and sustainable development of the Islamic societies.

Molaverdi made the remarks in a meeting with Syria’s Social Affairs and Labor Minister Rima al-Qadiri on the sidelines of the specialized summit of the women affairs ministers from the Islamic countries in Mashhad, northeastern Iran.

The summit was part of ‘Mashad, 2017 Cultural Capital of the Islamic World’ held in the holly city of Mashad on Thursday.

Noting that social policymaking for families in the Islamic countries struggling with conflicts, violence and extremism has been stopped or impeded, Molaverdi said that resources that had to be allocated to women and men empowerment, were invested in the fields that could be even a threat to families’ foundations.

She described security as the required prelude to development and said that Iran has always expressed its concern over the situation is Syria, in which the victims are mostly women and children.

Al-Qadiri, for her part, described the boost of ties between Iran and Syria, particularly in the field of women and family affairs, as the positive point of participating in the summit.

She added that such meetings will result in close distinguished strategic ties between the two countries.

The Syrian minister also urged sharing Iran’s experience on employment of women, with an emphasis on those who are family caretakers.

Molaverdi on the sidelines of the summit also held separate talks with Afghan, Indonesian, Mauritanian and officials from other countries.