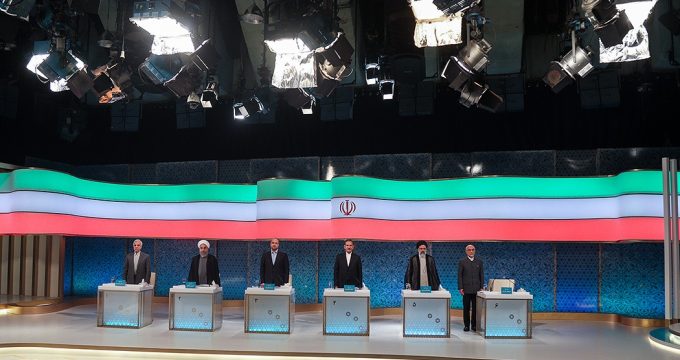 Press TV- The first debate among the six candidates of the 12th Iranian presidential election is being aired live on state television.

The candidates are set to outline their plans for the post. They will be given an equal time to garner as many votes as possible in order to win the ticket to the office.

The first debate is scheduled to last for three hours.

The live broadcast aims to reduce the candidates’ campaign spending and pave the way for eligible voters to make their choice based on the sharp-cut and unambiguous plans represented during the program.

Upon entering the headquarters of the Islamic Republic of Iran Broadcasting (IRIB) in the capital, Tehran, Rouhani was asked if he was ready, to which he responded, “We’re probably all ready that we have come [here].”

Meanwhile, Mehr news agency is reporting that the debate has been put off half an hour to 16:30 local time (1200 GMT) upon the request of Rouhani’s camp.

Morteza Heidari, the renowned Iranian television news host and presenter who is due to moderate the debate, also says that he is prepared for the task and everything has been rehearsed

There will be three live televised debates in total. Today’s debate will focus on social issues while the next two will revolve around economic and political matters.

The candidates have drawn lots to determine their seating arrangement for the debate. Every effort seems to have been made not to leave any room for accusations of partiality.

According to schedule, Fars News Agency reports, the candidates can hold a meeting of 15 minutes with the aides and advisors after 90 minutes of debate.

The debate begins with Heidari outlining its format and regulations and how the time will be broken up between the candidates.

The first candidate to answer the first question is Aqa-Mirsalim. This too has been determined through a draw. The question he will answer is about settlements on the outskirts and peripheries of cities. Aqa-Mirsalim expressed his serious concern about lack of management of natural resources. He said correct water management would be the first step to reduce immigration from rural areas to cities. He added that lack of attention to proper spatial planning was the main reason behind immigration.

The other five candidates now take two-minute turns to make their own remarks on the issue and challenge Aqa-Mirsalim.  Hashemi-Taba said Iran is plagued with severe environmental crisis. The third hopeful, incumbent Rouhani, said that immigration to big cities is a major problem not only in Iran but in most countries. He added that unemployment and low income are major reasons behind immigration to big cities. Qalibaf, for his part, said social and economic imbalance is a major reason behind immigration. Jahangiri said attention to immigrants to big cities must be the first priority in tackling their problems. Raeisi said the first priority is to have correct figures on immigration to big cities. While Qalibaf put the number of outskirts dwellers at 11 million, Raeisi said the figure belongs to four years ago and currently stands at around 16 million.

Aqa-Mirsalim then retook to the podium and said immigration should be curbed before it gives rise to social crises and added that 350,000 illegal wells have wasted the country’s water resources and caused immigration. The candidate said social facilities must be distributed evenly in cities and villages and expressed regret that some 10.2 million Iranians are totally illiterate. He noted that suitable housing must be provided in small towns and villages to prevent immigration.

Raeisi is next up on the podium. He will respond to a query on social justice.