A Look at Iranian Newspaper Front Pages on April 27

Iran Front Page- IFP has taken a look at the front pages of Iranian newspapers on Thursday and picked headlines from 18 of them. IFP has simply translated the headlines and does not vouch for their accuracy.

Many Iranian newspapers today covered the beginning of presidential debates between the six candidates as of Friday.

The remarks by reformist and conservative figures about the presidential candidates and the speculations around the May 19 election also received great coverage.

The death of 9 Iranian border guards in clashes with outlaws near the Pakistani border in southeastern Iran was also a top story today.

3- $1bn for Yemenis amid Warnings about Starvation 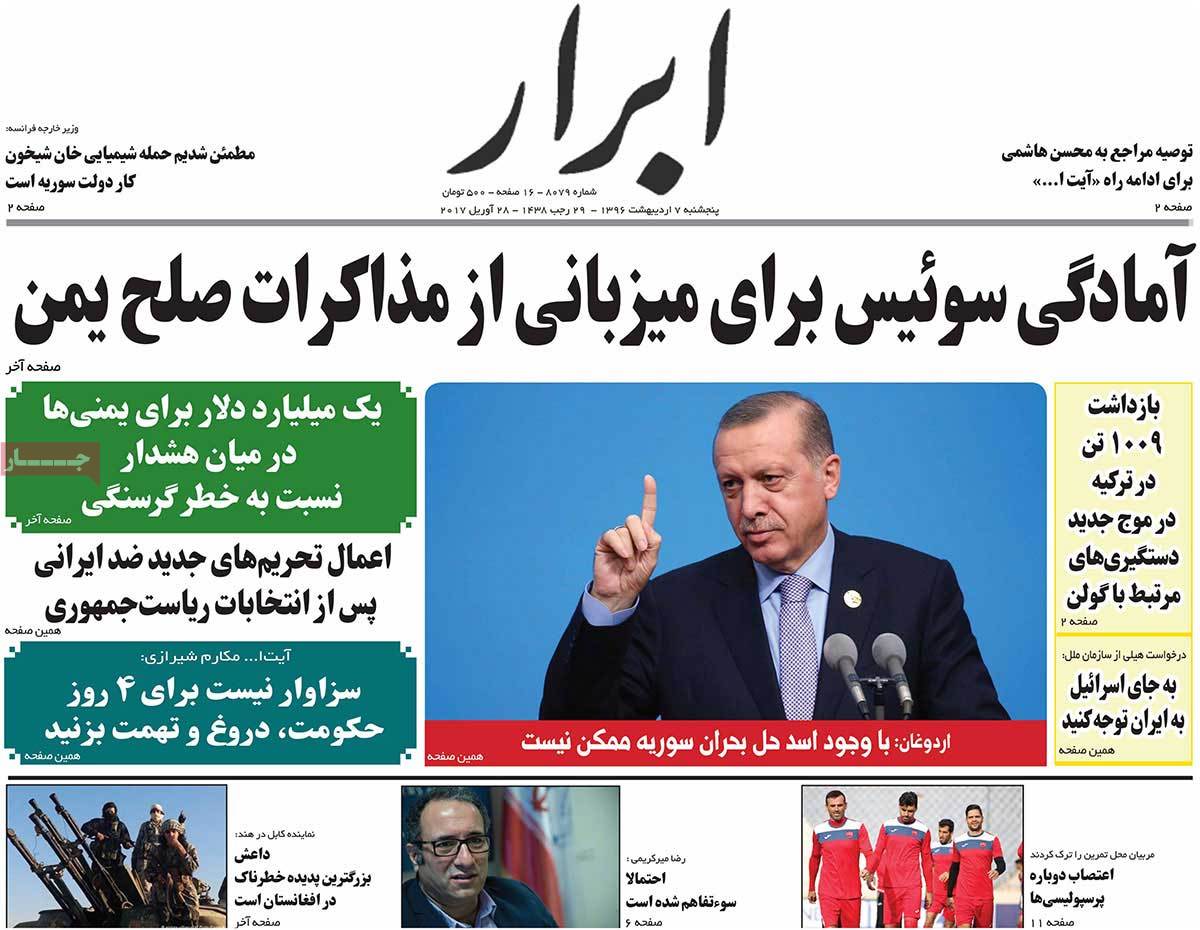 2- Mr Rouhani Didn’t Realize Any of His Promises: Actor 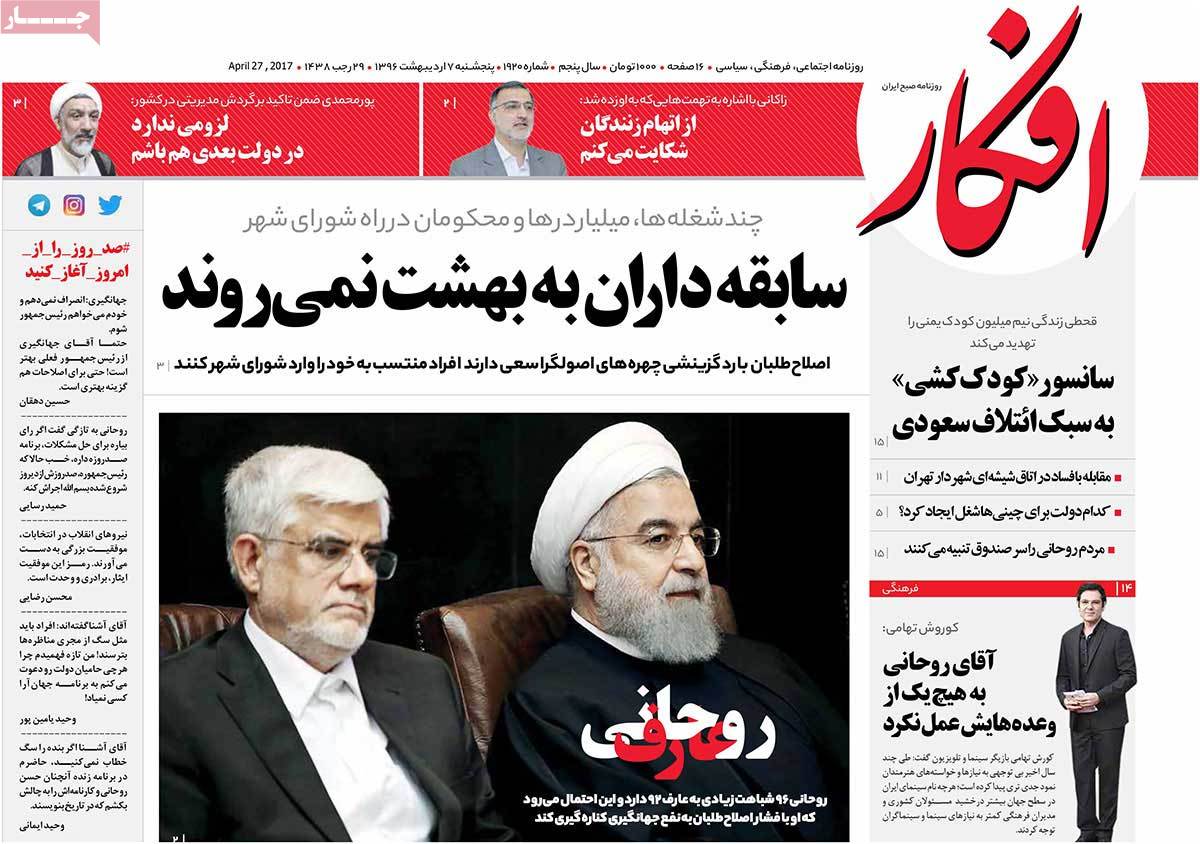 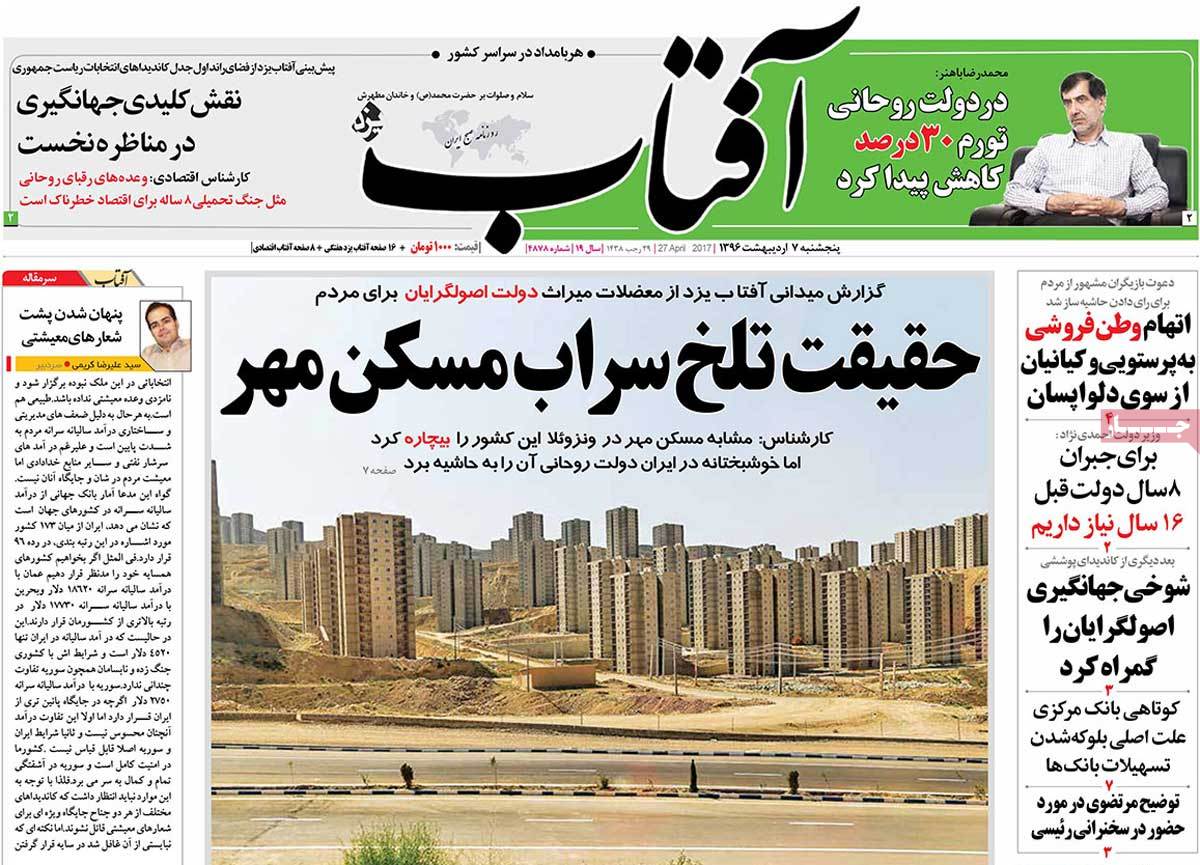 4- Next Administration Should Ease Int’l Tensions 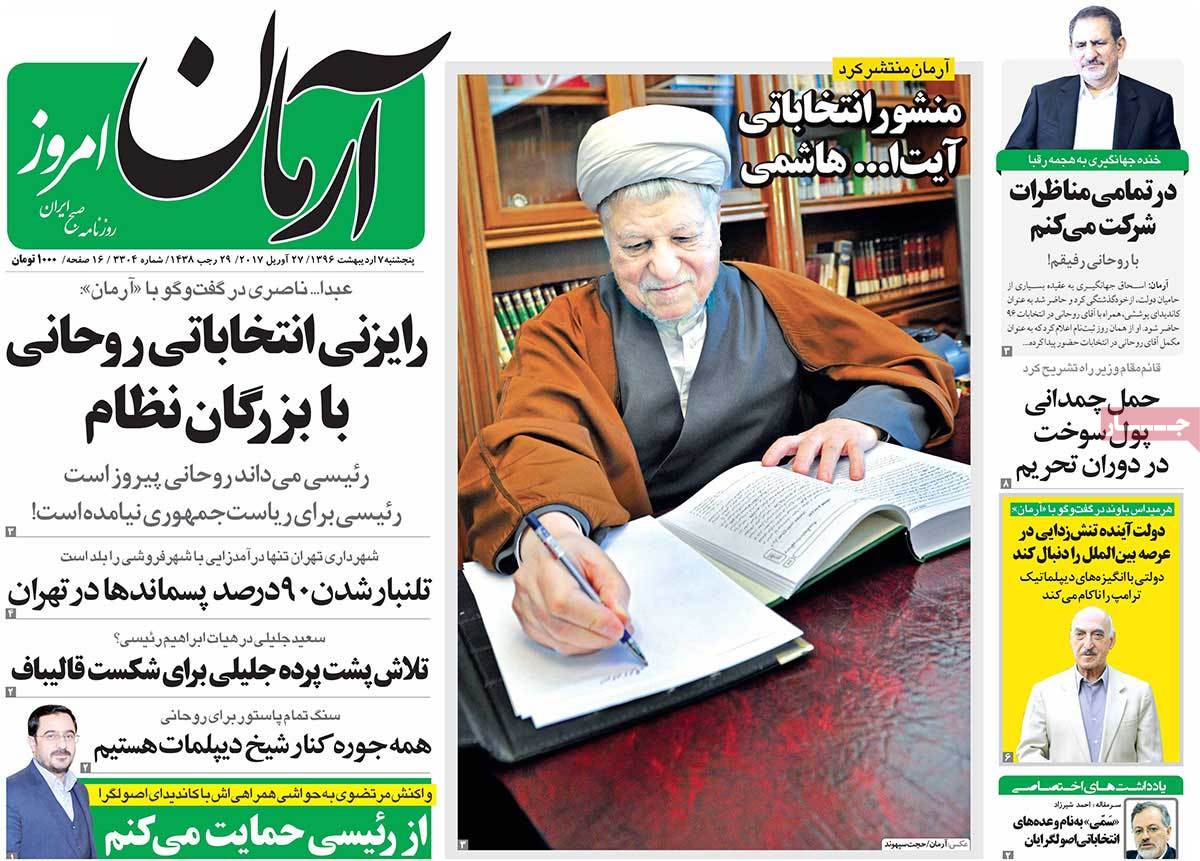 2- Environment Before, After Rouhani’s 4-Year Term

3- What Are Environmental Expectations from Future Government? 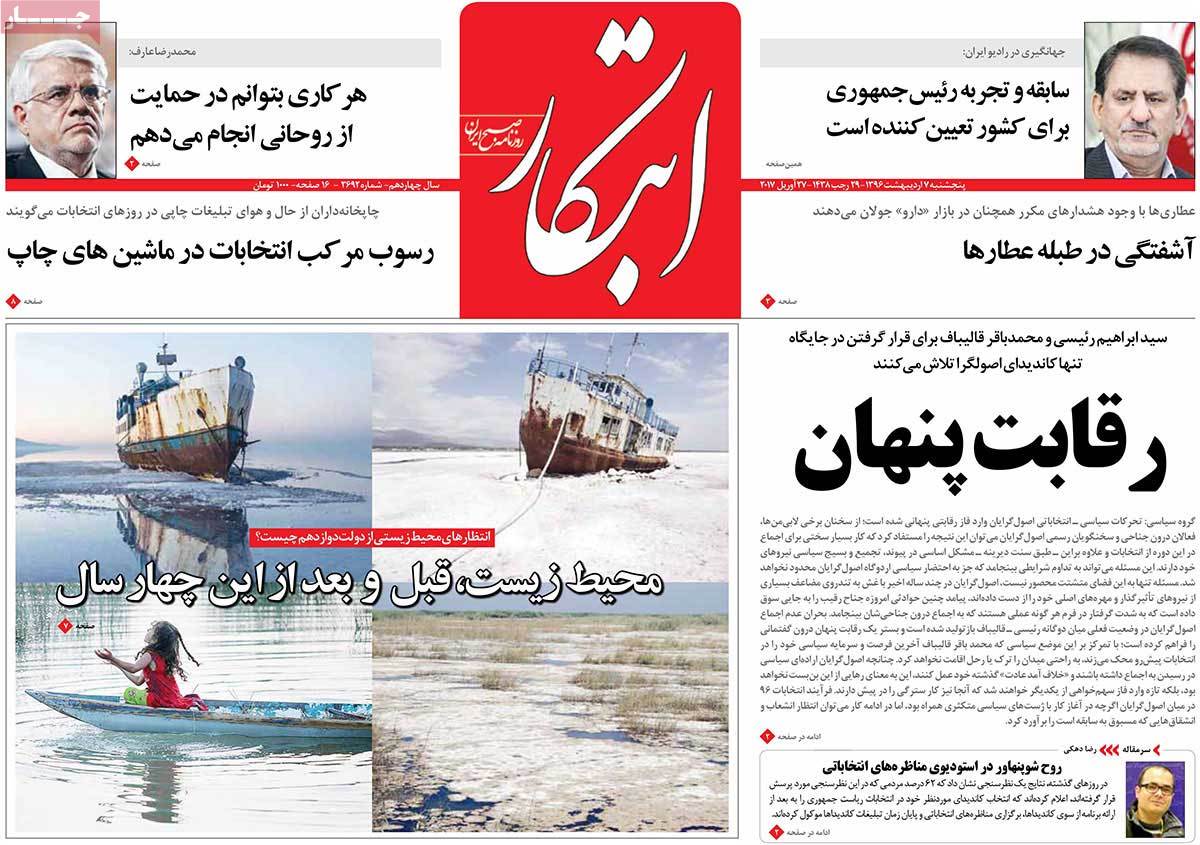 1- Iran Becomes Self-Sufficient in Petrol Production, Can Export it to Other Countries 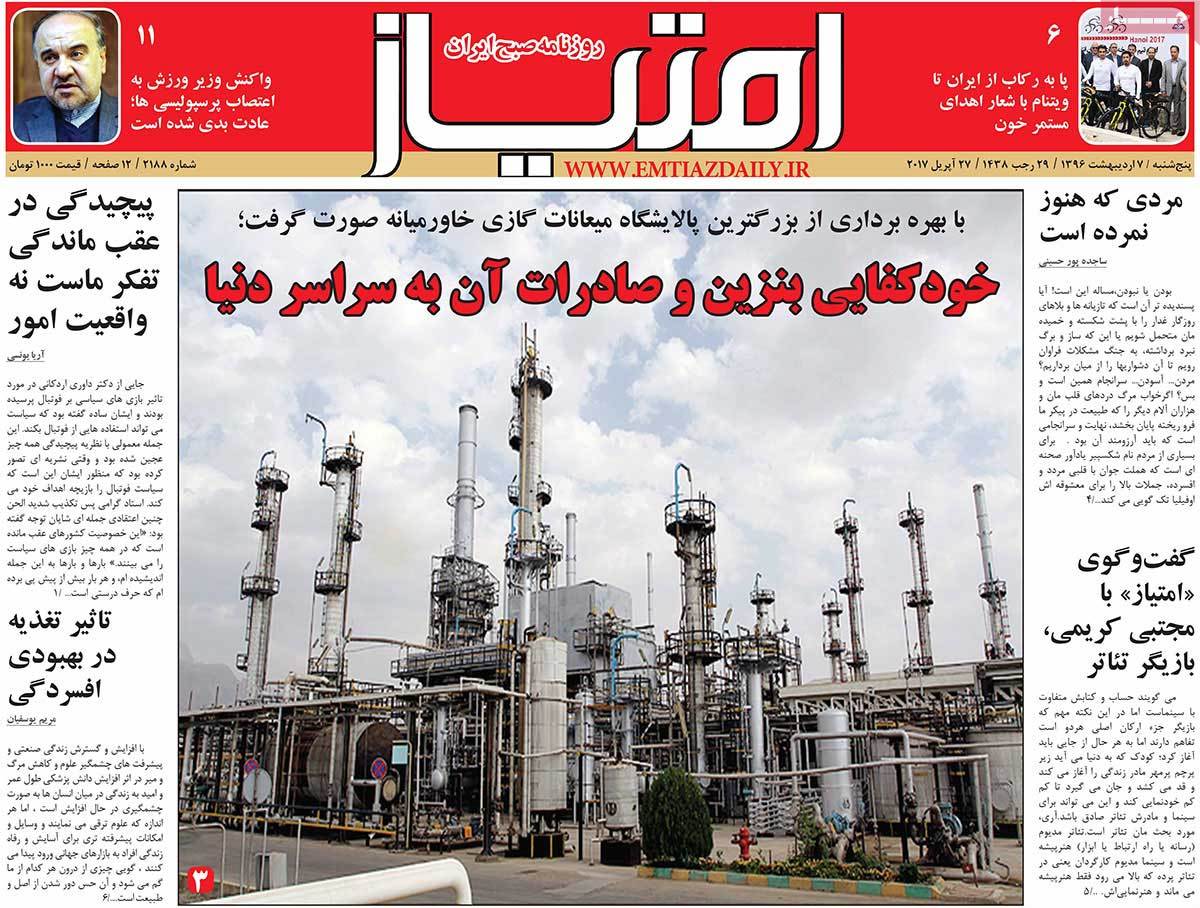 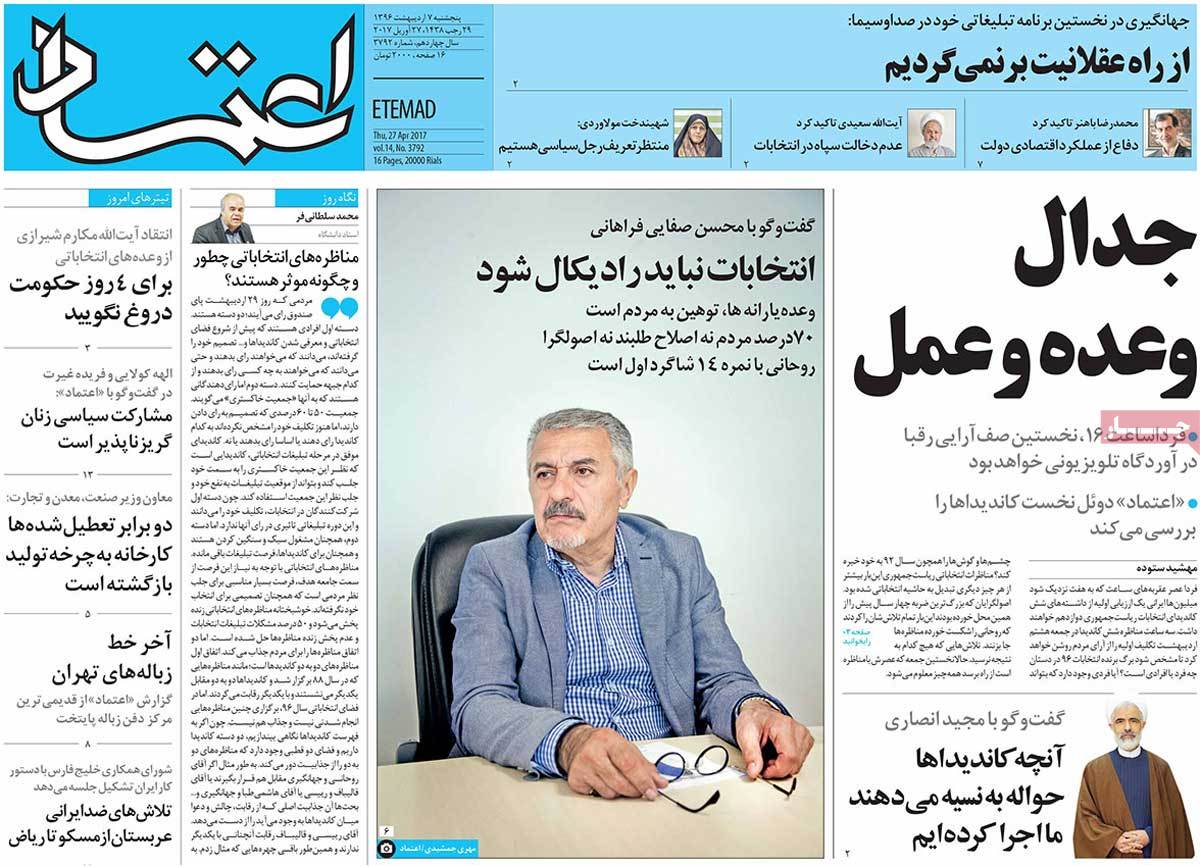 1- All Iranians to Have Electronic ID Cards

2- Iran to Stand against Any Threat from US: DM

6- Iran’s Presidential Elections to Be Held in 103 Countries 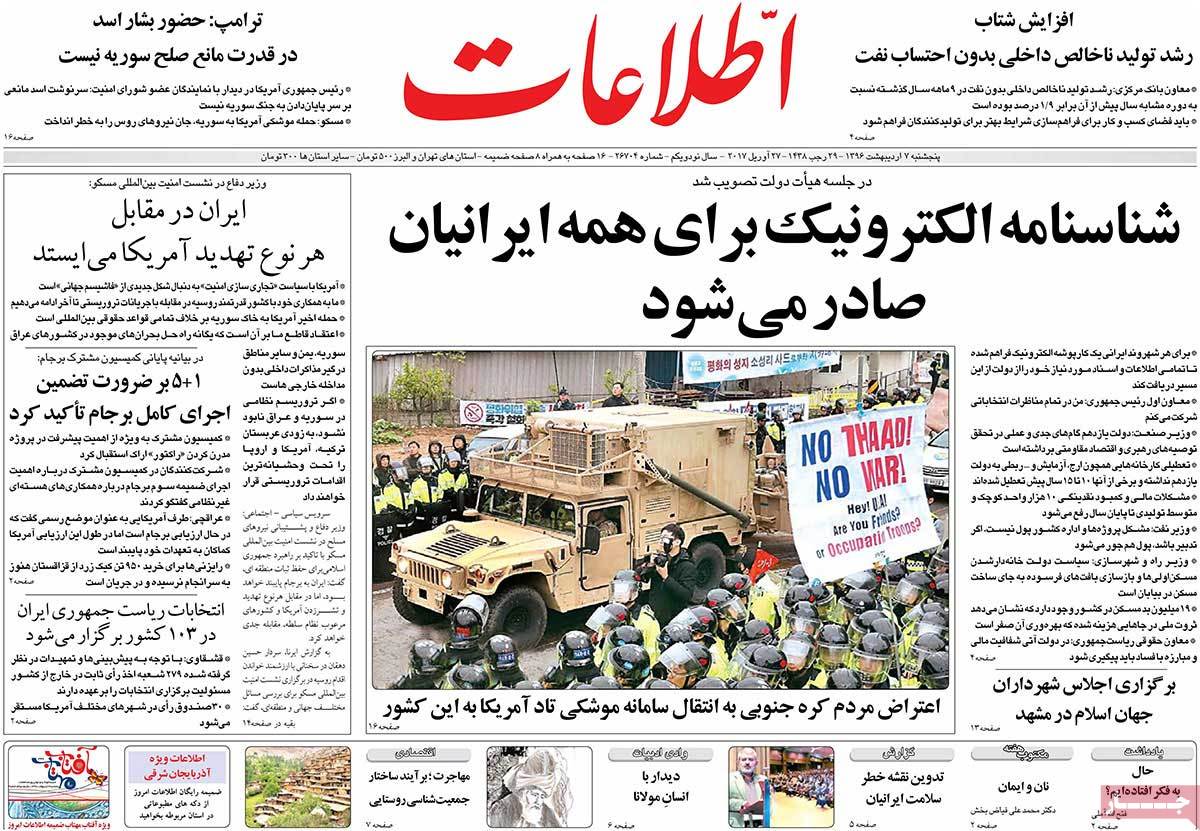 1- France Dreams of Having an Uncontroversial First Lady

2- Are They Really Worn-Out? 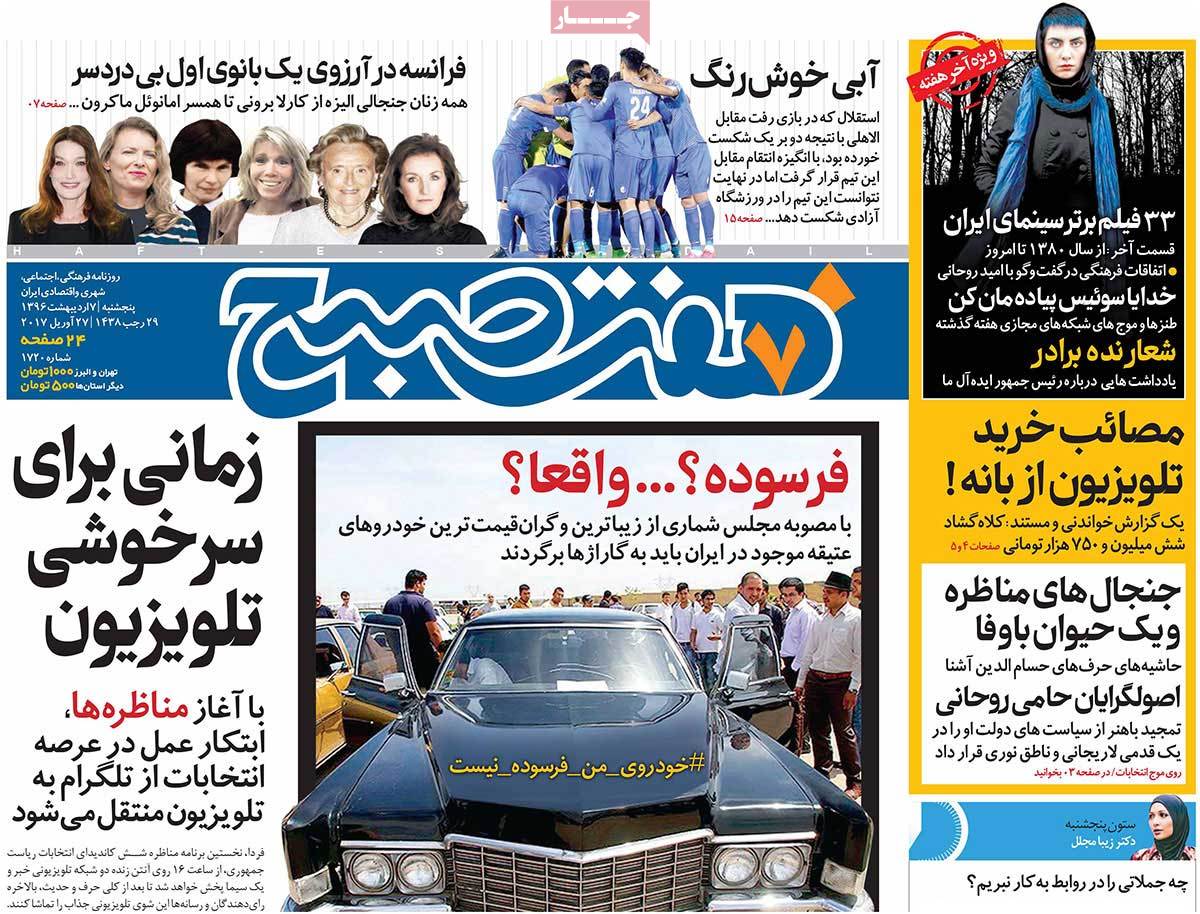 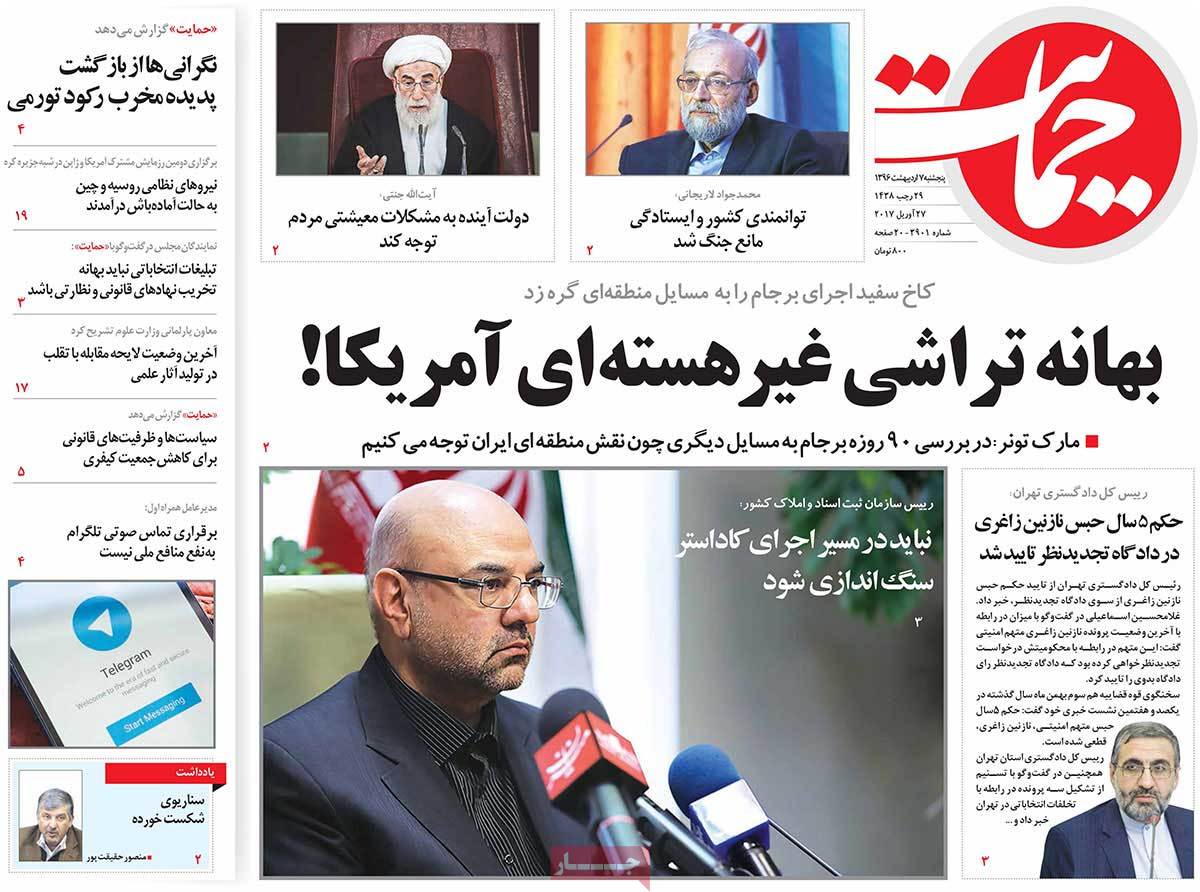 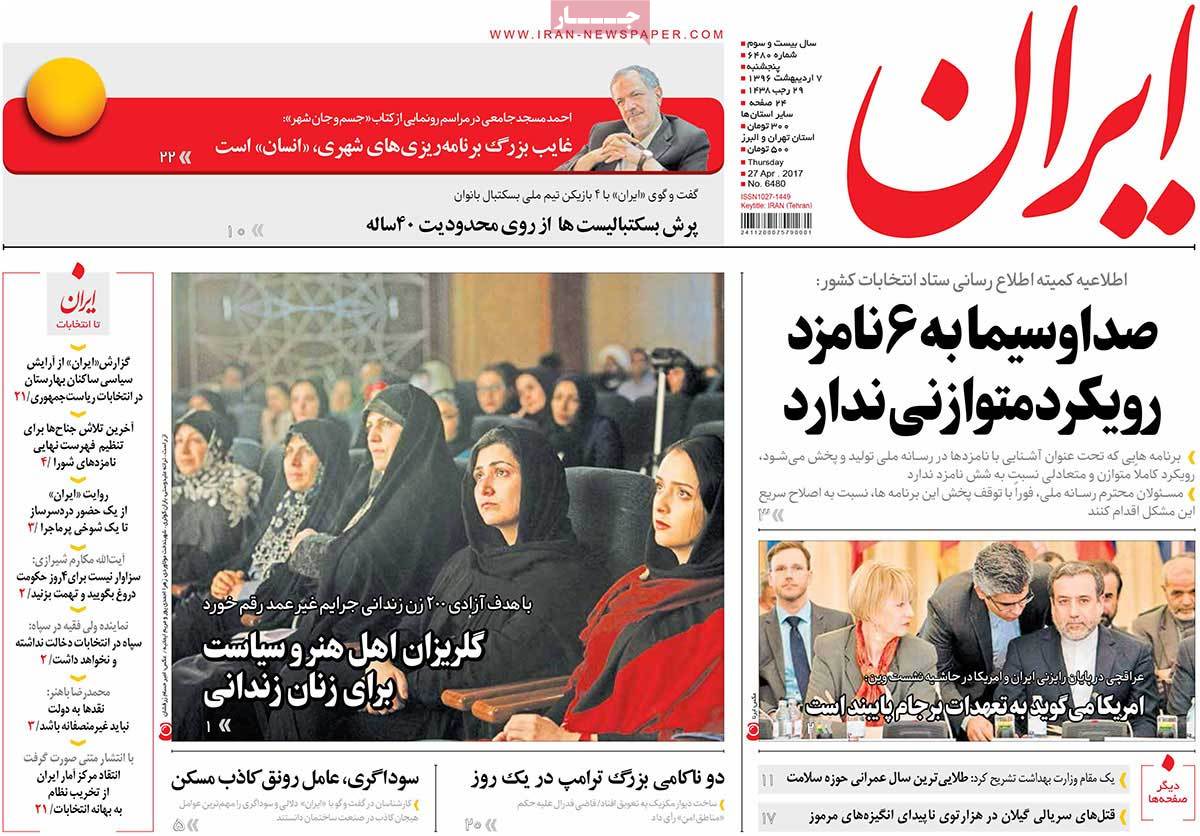 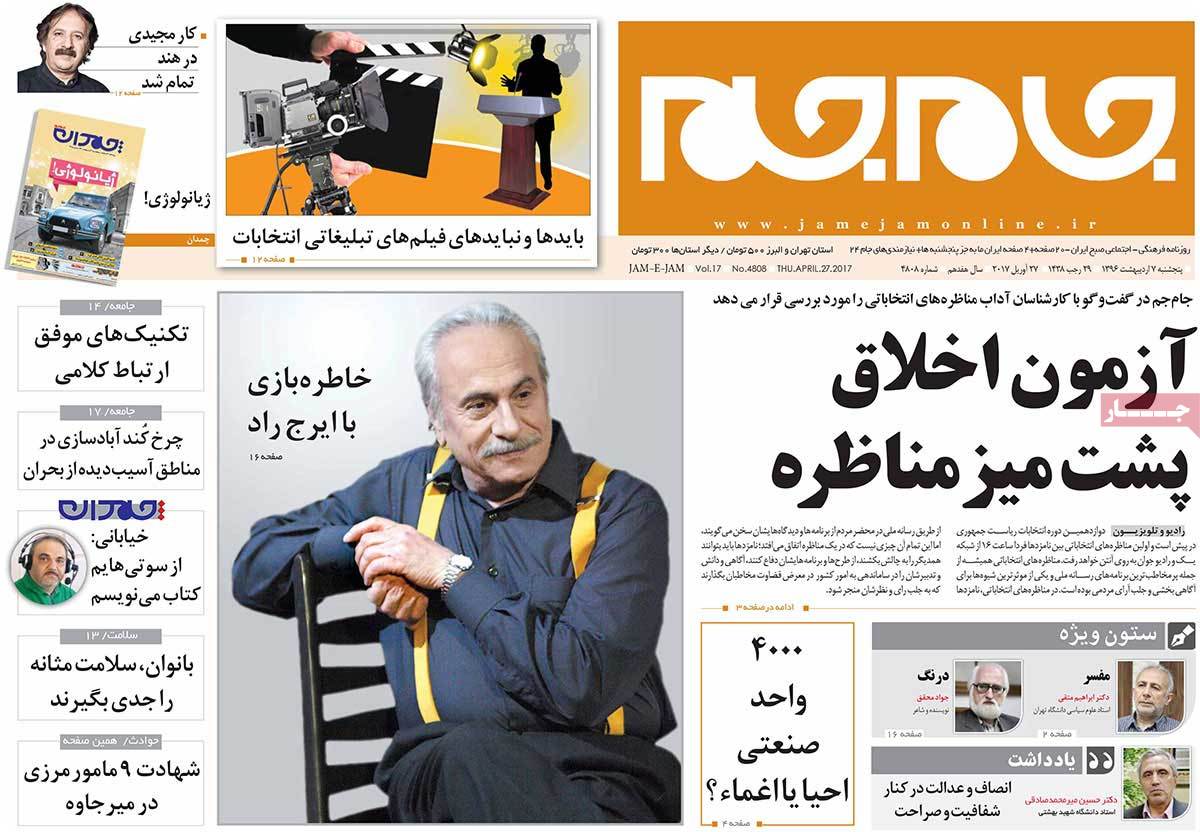 2- You’ve Arrived 4 Years Late! [excerpts from a number of pro-government newspapers on the issue of false promises given during election campaigns]

3- Senior Conservative Bahonar: They Thought JCPOA Can Do a Miracle 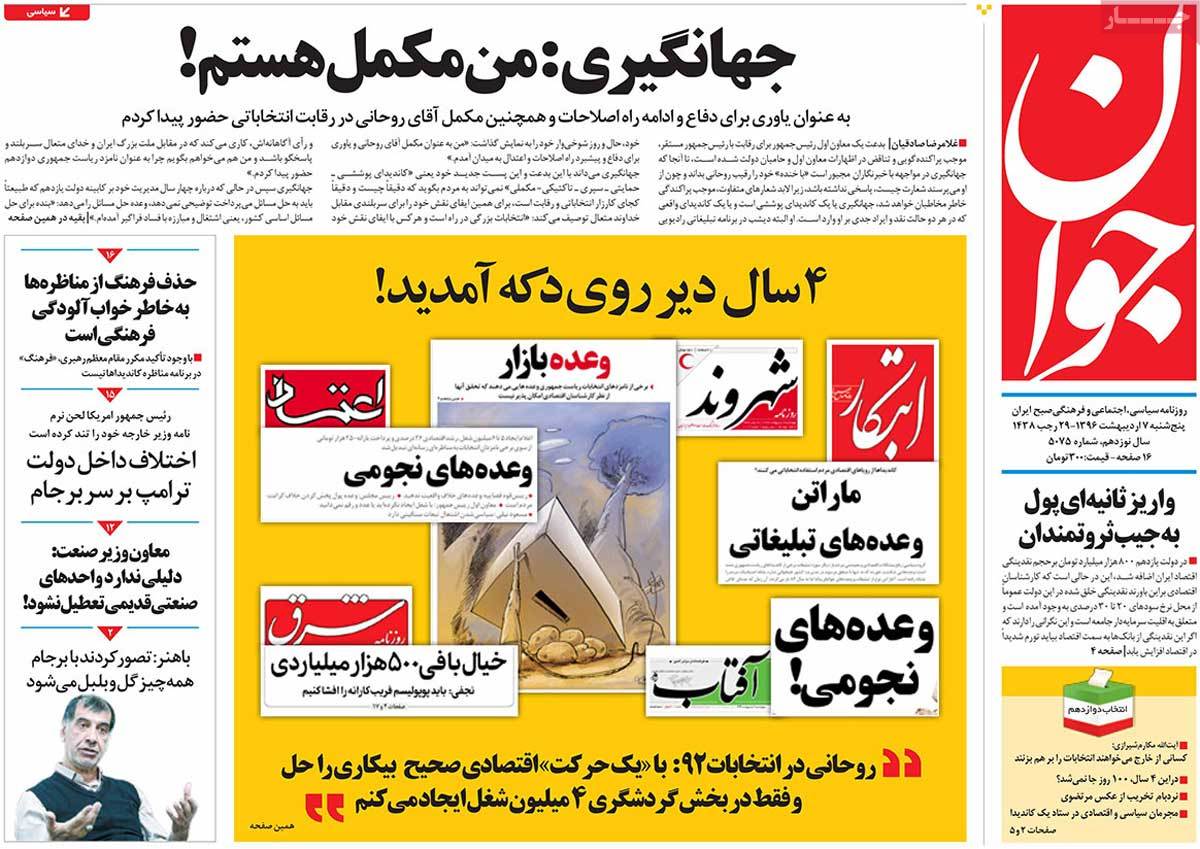 2- Rouhani: Resolving Economic Problems Most Important Priority in Next Gov’t

3- Protest Rallies, Clashes in South Korea against Deployment of US Missile System 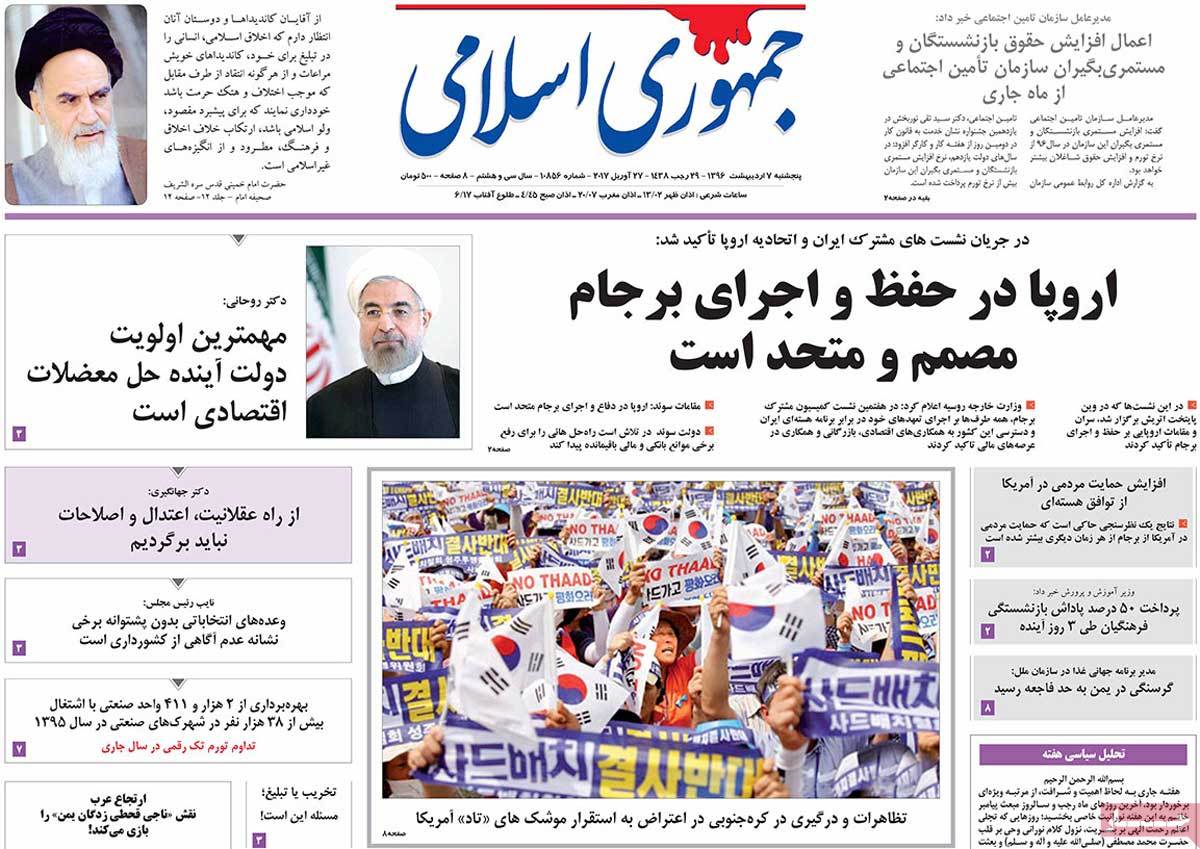 1- Latest Prudence by Rouhani’s Administration: Manipulation of Past Statistics

2- FAO’s Unprecedented Warning: 20m People to Die of Hunger in Next 7 Months 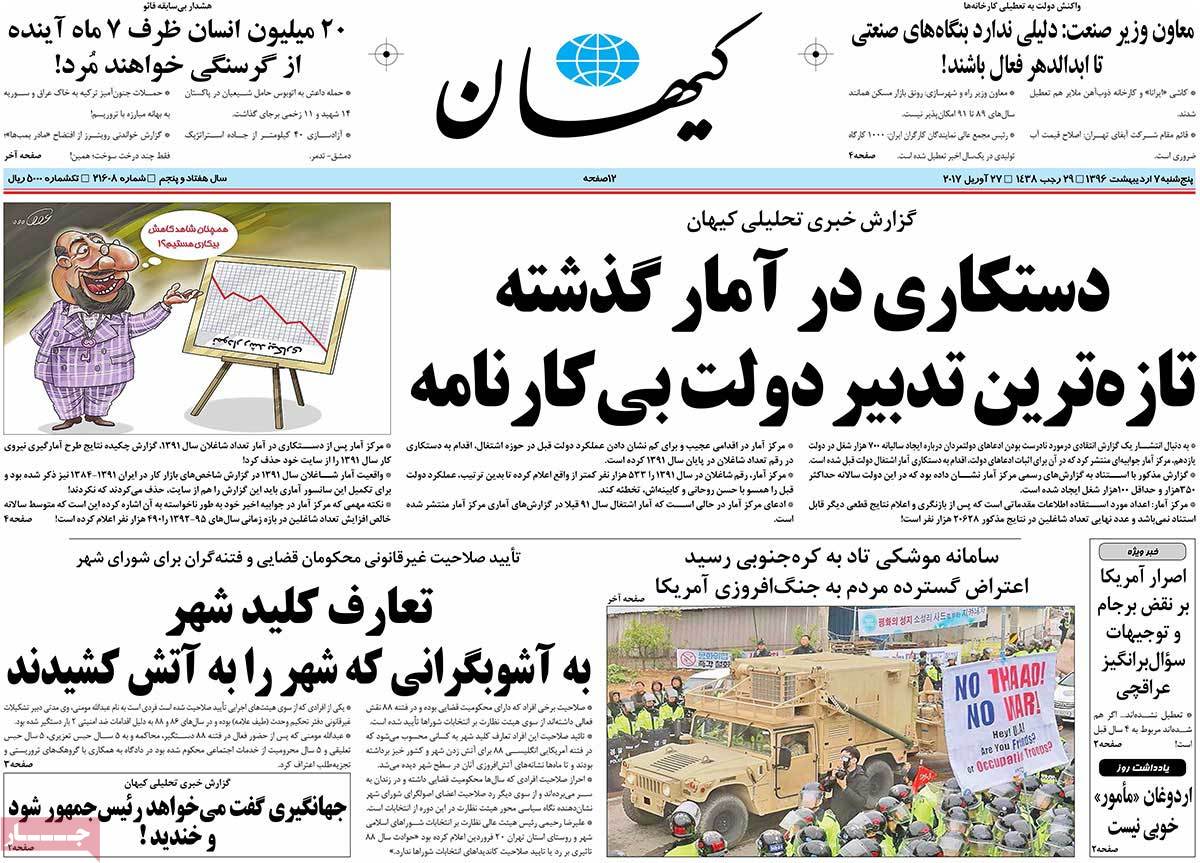 1- Softer Tones of Candidates ahead of First Presidential Debate 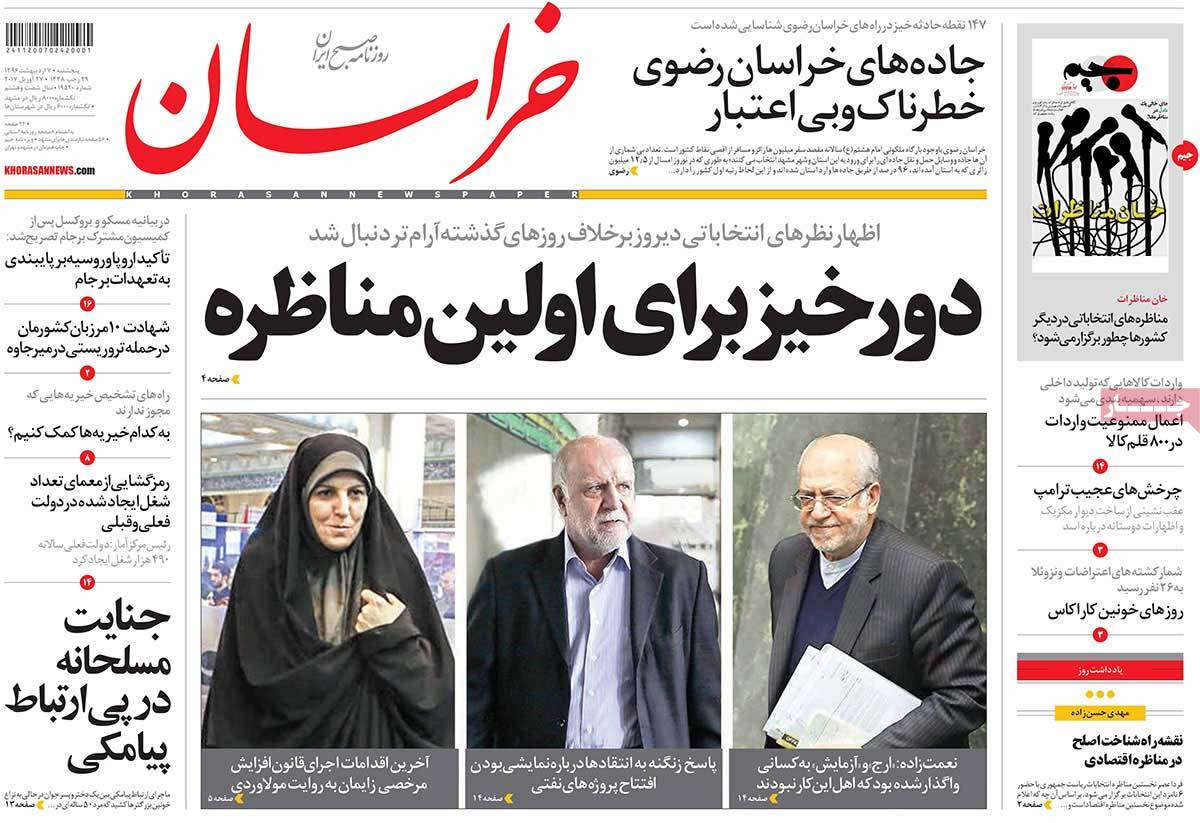 3- Jahangiri: I’m Not Rouhani’s Spokesman, I Want to Become President

4- My Priority is to Rely on Domestic Potentials in Resolving Economic Issues: Mirsalim

7- Raisi is a Competent Candidate, Qalibaf is a Capable Force: Javad Larijani 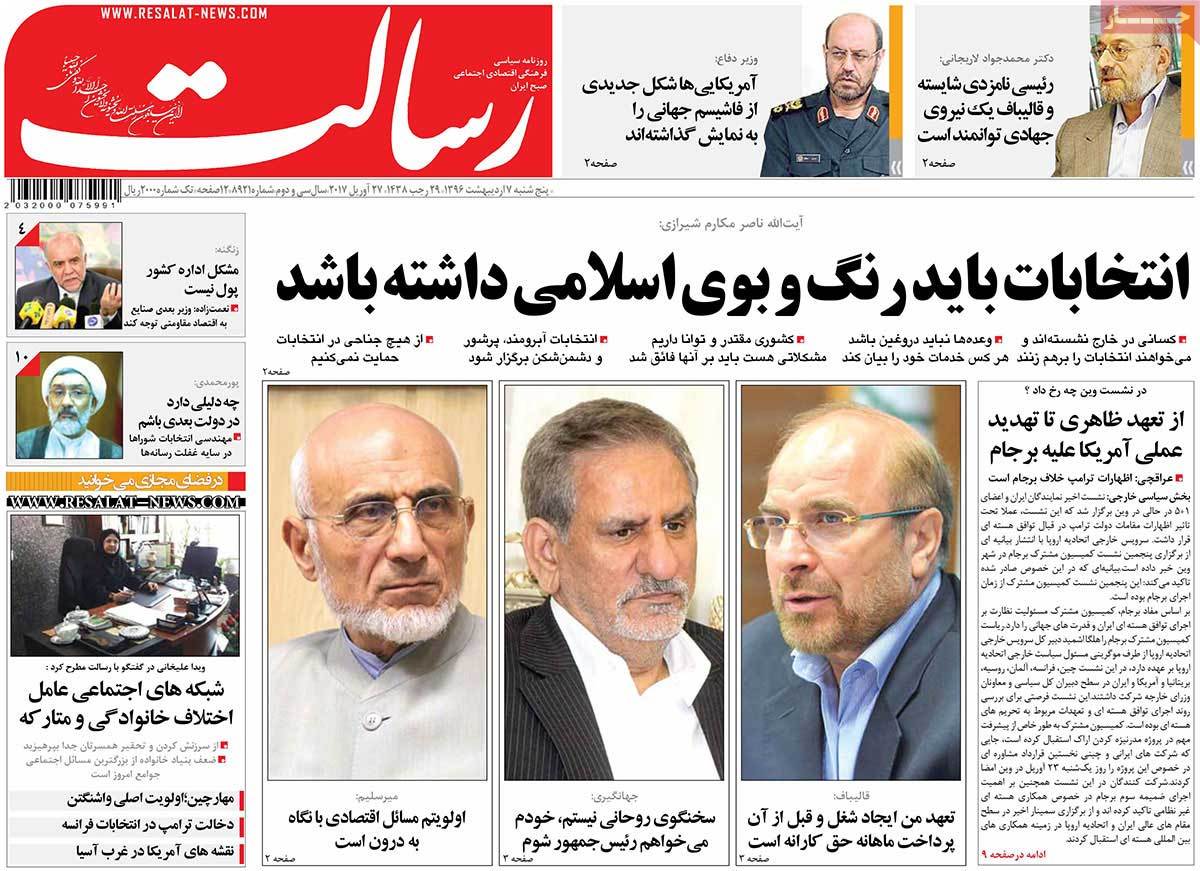 1- I Want to Become a President: First VP Jahangiri 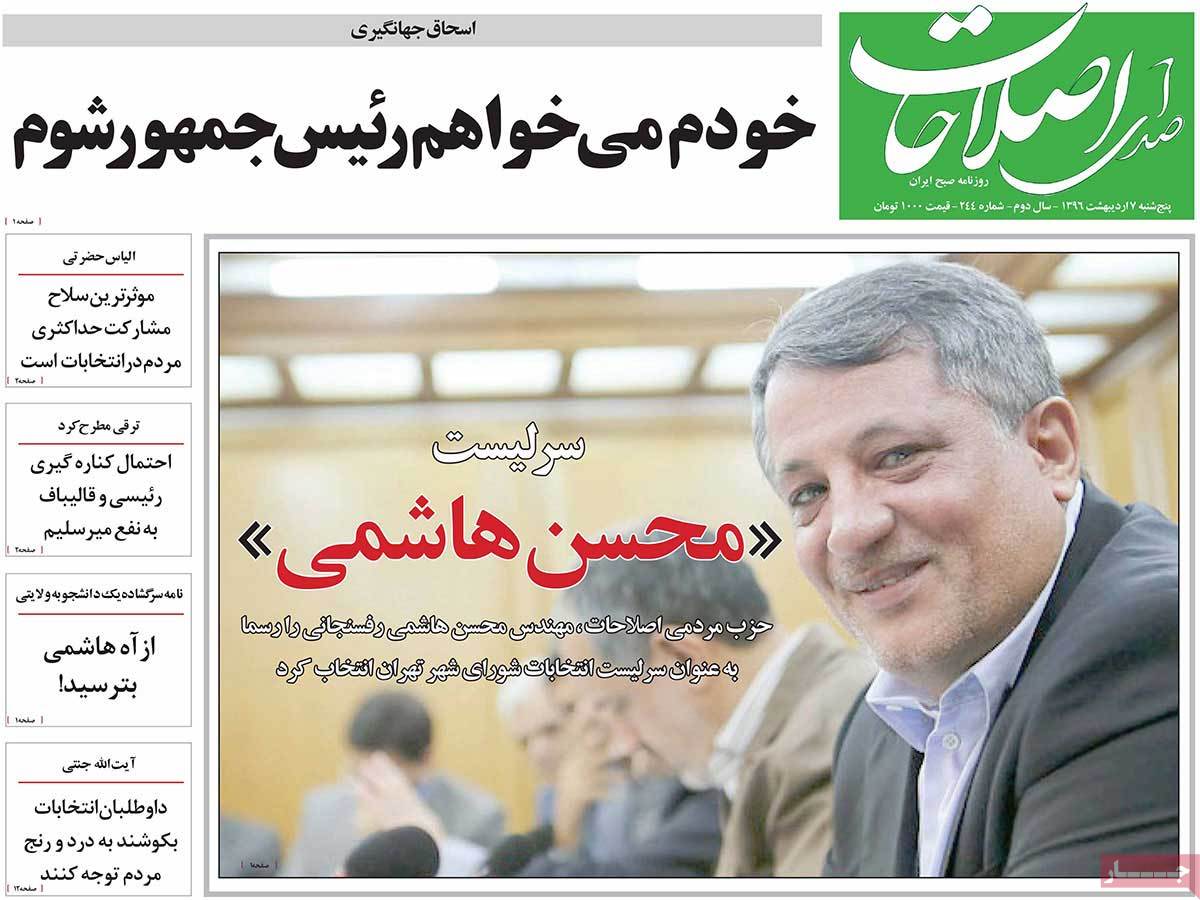