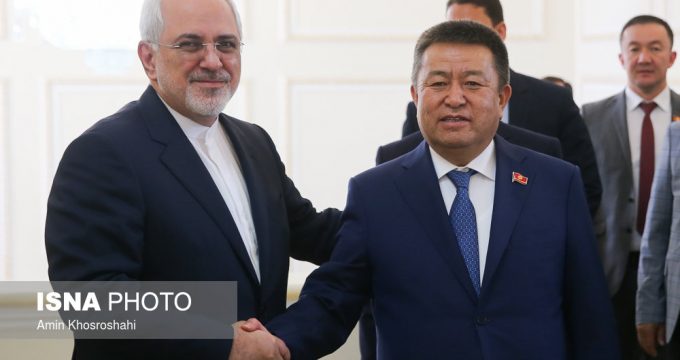 IRNA — Foreign Minister Mohammad Javad Zarif on Wednesday called for global efforts to fight and help uproot terrorism and extremism as threats to the international community.

Zarif made the remarks in a meeting with visiting Speaker of Kyrgyzstan’s parliament Chynybai Tursunbekov in Tehran on Wednesday.

Kyrgyzstan is among our good friends and the relations between the two countries have always been very promising, Zarif said.

Referring to the common dangers threatening all at this juncture, the Iranian foreign minister Zarif called for the expansion of mutual cooperation in the ongoing fight against terrorism and extremism.

Kyrgyz parliament speaker, for his part, highlighted cultural and historical relations between the two countries dating back to over five thousand years ago which played significant status in both sides at local and international gatherings.

Referring to the implementation of the Joint Comprehensive Plan of Action (JCPOA), he described it as very significant achievements for the Islamic Republic of Iran.

In post-JCPOA era, grounds for expansion of all-out cooperation have been created and we hope to witness more Iranian investors to invest in Kyrgyzstan.