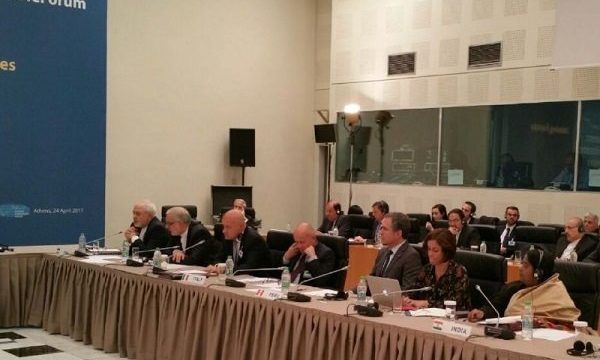 In his address to ‘Ancient Civilizations Forum’ in Athens, Iran’s FM Zarif called for common, multilateral solutions to universal plagues such as extremism and terrorism.

Iran ranks as No.2 oil supplier to S.Korea 1st time for a quarter

Iran ranked as South Korea’s second-biggest oil exporter over the first three months of 2017 as it ramped up output to regain market share after sanctions were lifted last year, the first time ever it has claimed the No.2 spot for a quarter.

Leader of the Islamic Revolution has agreed to extend pardon or discount on sentence of 593 prisoners for the occasion of anniversary of birth of Prophet Muhammad.

Iranian Armenians have today staged a protest outside the Turkish Embassy in Iran to commemorate the 102nd anniversary of the Armenian Genocide committed by the Ottoman Empire, Panorama.am reports, citing Tasnim Iranian news agency.

Iranian President Hassan Rouhani called on Pakistan to push for completion of a long-awaited gas pipeline between the two countries.

Iran’s presidential candidate Qalibaf wants no more of the same

Deployment of Iran’s flotilla in the open seas is a source of pride for the Islamic establishment and serves as manifestation of the country’s authority in the international waters, says the Navy Commander.

China and Germany will take part in a project of electrifying the railroad linking Tehran to the holy northeastern city of Mashhad, Iran, the Iranian deputy minister of transportation, Saeed Mohammadzadeh, said.