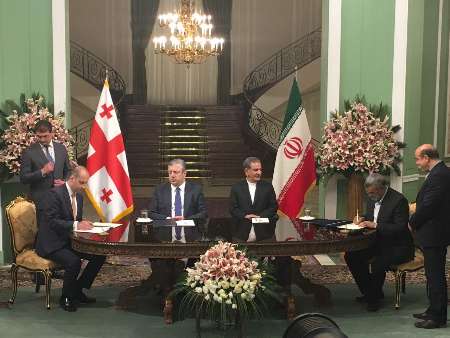 “Georgia has created suitable conditions for Iranian economic activists and investors,” Kvirikashvili said on Saturday, noting that Iranian businesses are welcome in his country.

He made the comments at a joint press conference with Iranian First Vice-President Eshaq Jahangiri in Tehran.

The visiting prime minister also voiced Georgia’s readiness to remove all barriers to private sector ties in order to boost cooperation between Tehran and Tbilisi.

Jahangiri, for his part, described the Georgian premier’s trip to Tehran as a “milestone” in the expansion of bilateral relations, saying officials of the both countries are determined to bolster ties without any limits.

Iran and Georgia have a lot in common, he added, saying that, as a result, they share stances on many regional and international issues.

Heading a high-ranking delegation, the Georgian prime minister is in Tehran for political and economic negotiations.

Prior to the joint press conference, officials from the two sides signed five memorandums of understanding for stronger cooperation in agriculture, sports activities, information and communications technology, as well as establishment of a refinery complex in Georgia.