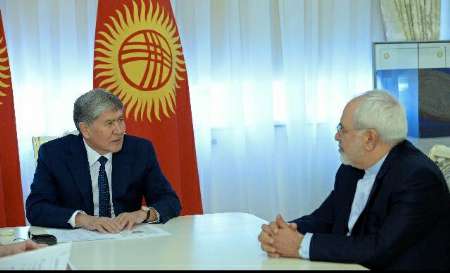 The talks focused on ways to widen bilateral ties in various issues.

During the meeting, the two sides commemorated the 25th anniversary of establishment of cooperation.

Prior to his meeting with Atambayev, Zarif announced at Tehran-Bishkek joint economic forum that Iran recognizes no ceiling to strengthen relations with Kyrgyzstan.

The two sides, as Zarif said, have potential to promote ties in the areas of technology, science, energy, industry and agriculture.

Kyrgyzstan is the last leg of Zarif’s tour to three Central Asian and Caucasian states including Turkmenistan, Georgia and Kyrgyzstan that started on Sunday (April 16) at the head of a political and economic delegation.