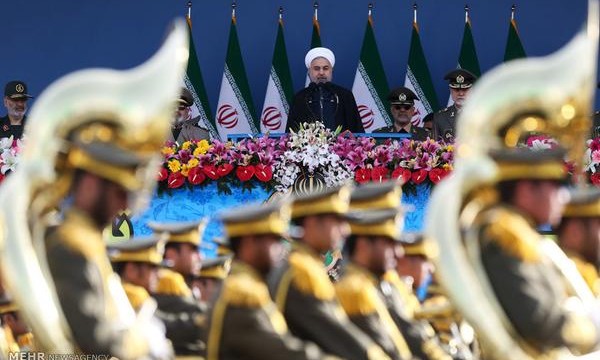 MNA – Hassan Rouhani said Iran’s defensive Army is not a threat to region and is ready to defend the whole critical and pivotal region of the Middle East.

Speaking at the massive military parade on Tuesday morning to mark Iran’s Army Day, President Rouhani said “I would like to extend my warm congratulations on the National Army Day to all staff, commanders, their respected families as well as the Leader of the Islamic Revolution Ayatollah Khamenei.”

“Army Day marks a reminder for sacrifice of brave Iranians during eight years of Imposed War against Iraq as well as protecting the country’s borderlands for almost 30 years after the war,” he continued.

“Virtuousness and grandeur have always been attributed to the Army of the Islamic Republic of Iran both in the regions and in the world. Some armies in the world are associated with interference in internal affairs of other countries, genocide, protecting terrorists, coup, disrespect for view of people and the law while the Iranian Army is reminiscent of order, discipline, faith and holy defense of territories within the framework of law and national interests,” Rouhani said.

“The Constitution of the Islamic Republic of Iran requires the Army to protect the country’s independence and territorial integrity as well as to maintain the Islamic Revolution,” he underscored.

Rouhani highlighted that capabilities of Iranian armed forces are now incomparable to the time of Imposed War since eye-catching achievements have been made in the meantime; “Iran’s defense industry and armed forces are becoming more powerful on a daily basis.”

The Iranian President rejoiced to note that one major objective of his government had been strengthening the country’s defense capabilities as evidenced by the 45% rise in the budget for defense sector despite tough economic conditions.

He recalled that the amount of progress in the past three and a half years were equal to the 10-year period before that saying “Iran’s armed forces are more prepared than any other time though they would never pose threat to others.”

Hassan Rouhani emphasized that the Army mainly seeks to prevent tensions and conflicts while at the same time maintains vigilance against conspiracies and boosts its deterrent power.

The senior official reassured neighboring countries that Iranian armed forces were ready to defend the whole critical and pivotal region of the Middle East; “other states can be confident that Iran’s Army holds defensive rather than offensive power.”

“Nevertheless, we have shown how vigorously will the Army defend people and the country in the face of aggression by invaders.”

Later at his speech, Iran’s President enumerated unique characteristics of the country’s Armed Forces including faith and divine inspiration since Army personnel are devoted and has always had sacrifice.

“Another distinguished feature of Iranian armed forces is their close relations with the nation which is a mutual relation indeed,” he stressed.

Rouhani said enjoying a Commander in Chief was another distinguished aspect of the Armed Forces, a leadership which stems from Islamic jurisprudence and moderation and possesses a legal and religious position.

He recalled the remarks made by Imam Khomeini and the Leader Ayatollah Khamenei who urge the armed forces to keep away from political games as a means of gaining more power and enjoying support of the nation.

Rouhani expressed hope that, by implementing religious orders of the Leader, unity will increase in Armed Forces in order to give sense of safety and calmness to the people.