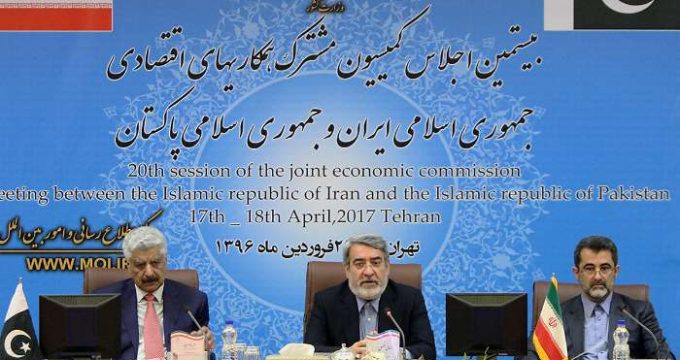 Attending the 20th session of the Iran-Pakistan Joint Economic Commission, Abdolreza Rahmani Fazli said the two countries, having border, cultural, religious, economic and trade commonalities, can be a good partners.

Rahmani Fazli noted that the volume of transactions between Iran and Pakistan has the capacity to increase up to 5 billion dollars in various economic, trade, tourism and energy fields.

Saying that Iran-Pakistan have five common areas and border markets, he also stressed that the two countries can expand their capacities.

The Iranian official also referred to Tehran-Islamabad’s common cooperation fields, and reiterated that activities for further cooperation in energy, railway, transport, steel and petrochemicals are increasing in the eastern part of Iran.

The two parties are expected to follow up the implementation of the agreements reached during the 19th Iran-Pakistan Joint economic Commission held in Pakistan in December 2014.

They will also explore new ways to further enhance economic, trade and banking cooperation between the two neighboring countries.