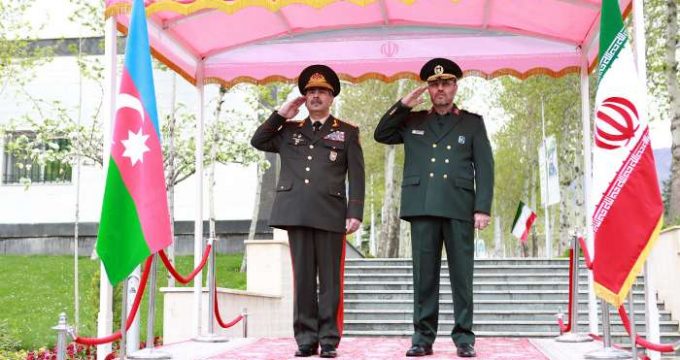 Tasnim – Iranian Defense Minister Brigadier General Hossein Dehqan called for peaceful settlement of the Nagorno-Karabakh conflict between Azerbaijan and Armenia, saying there is no capacity for a new crisis in the region, which is already plagued with insecurity and terrorism.

In a meeting with his Azeri counterpart in Tehran on Sunday, Dehqan expressed the hope that Baku and Yerevan would remain committed to peaceful resolution of disputes over the Nagorno-Karabakh region and would not permit the outsiders to interfere that only escalates tensions.

West Asia is already faced with a host of threats, instability and insecurity, the Iranian minister deplored, noting that lack of “responsible policies” by the countries towards insecurity will aggravate the crisis.

Dehqan also added that the troubles are not confined to the region alone, but the world is beset by the threat of terrorist groups such as Daesh (ISIL) and other “extremists affiliated with Takfiri-Wahhabi ideologies” and  by “aggressive policies of the US, the Zionist regime (of Israel) and Saudi Arabia.”

The Iranian minister also stressed the need for closer military cooperation between Iran and the Azerbaijan Republic and for efforts to block the outside parties seeking to undermine Tehran-Baku ties.

For his part, Azeri Defense Minister Zakir Hasanov voiced his country’s willingness to promote military and defense cooperation with Iran.

Azerbaijan is bound to maintain security along its common borders with Iran, and will not allow any damage to calm and security at the borders, he underlined.

Heading a high-ranking military delegation, Hasanov arrived in Tehran on Saturday at the invitation of his Iranian counterpart.