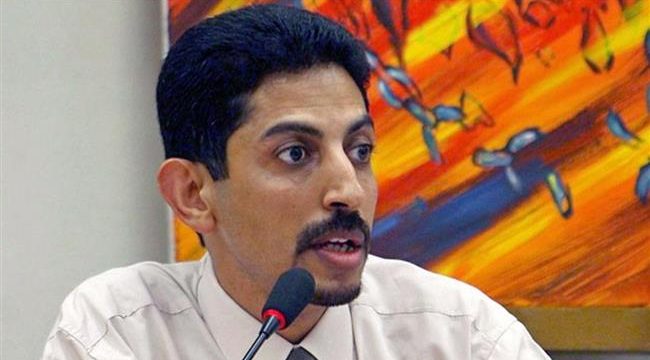 Press TV – Leading Bahraini human rights activist Abdulhadi al-Khawaja, who is serving a life sentence in relation to his influential role in the 2011 protests against the Al Khalifah regime, has reportedly gone on hunger strike.

Maryam al-Khawaja, the co-director of the [Persian] Gulf Center for Human Rights ([P]GCHR), tweeted that his father “has started an open-ended hunger strike” at the notorious Jaw prison in protest at his continued arbitrary detention and new repressive measures against inmates, Arabic-language Lualua television network reported.

Some of the new measures include denying the detainees access to medical care, cancelling hospital appointments, forcing inmates to wear shackles once outside their cells, and severely limiting family visits.

Meanwhile, Bahraini officials have briefly detained a senior Bahrain Center for Human Rights member at Bahrain International Airport upon return from a family vacation in Europe.

Nedal al-Salman (pictured below), the head of the NGO’s women and children’s rights advocacy division, was interrogated for over three hours before being released.

On August 29, 2016, Salman was banned from travelling to the Qatari capital Doha from Bahrain International Airport. She was on her way to Geneva to participate in several meetings at the United Nations Human Rights Council, when she was informed by airport officials that the Public Prosecution had ordered a travel ban against her.

Anti-regime protesters have held demonstrations in Bahrain on an almost daily basis ever since a popular uprising began in the kingdom on February 14, 2011.

On March 14, 2011, troops from Saudi Arabia and the United Arab Emirates were deployed to Bahrain to assist the Manama government in its crackdown on peaceful protesters.

Scores of people have lost their lives and hundreds of others sustained injuries or been arrested as a result of Bahrain’s crackdown.