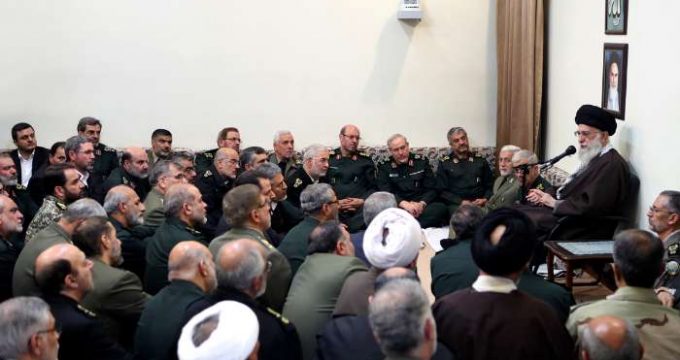 IRNA – Supreme Leader of the Islamic Revolution Ayatollah Seyyed Ali Khamenei said on Sunday that the enemy is trying to instigate and spread sense of disability and failure among the country’s officials to attain its sinister goals.

Referring to the enemy’s plan for weakening the spirit of people, officials and armed forces through throwing sense of disability and failure, the Supreme Leader said the Iranian armed forces with reliance on God and self-confidence should mount their capabilities and capacities and to remove shortcomings through taking initiatives with high spirit.

Serving nation is regarded as the biggest worship and all should identify the value of this opportunity, Ayatollah Khamenei said.

Financial shortcomings should not prevent attaining developments the same as during sacred defense era when the country suffered many shortcomings, but continued a long term war with victory without losing even one inch of the country’s soil, the Supreme Leader said.

Given all-out supports of the western governments to Saddam during Iran-Iraq imposed war, the Supreme leader said the hypocritical European states who claim Syria has used chemical weapons, during sacred defense era provided Saddam with hundreds of tons of chemical weapons to target our fronts in Sardasht and Halabche border regions.

Recent military developments and achievements are not comparable to the sacred defense era, underlined the Supreme Leader.

Enemy tries to employ various ploys and psychological tactics to weaken the spirit of Iranian officials but to no avail, the Supreme Leader said.

Army retired personnel are regarded as valuable assets and their financial and living standards should be heeded, the Supreme Leader said.

Enemies try to set a blow to different division of Iranian forces such as army, IRGC, police forces and Basij (voluntary forces) to weaken them from inside but these forces should be strengthened day by day, the Supreme Leader said.

Referring to the US missile attack to Syria, the Supreme Leader said crime, aggression and violating rule of laws is what American can do as they have proven it in other parts of the world, but the point is that where they will have the courage to carry out such attacks?

The Islamic Republic of Iran has proven that it never leave the scene by such wrongdoings and the Iranian people and their officials with their strong belief on revolution and with reliance on God withstands against all threats and hue and cries otherwise, the country had suffered from exhaustion in terms of spirit and civilization, Ayatollah Khamenei said.

The recent US military attack to Syria was a grave mistake and is regarded as an strategic mistake and it proves that they repeat the mistakes of their ancestors, the Supreme Leader said.

Former US officials created Daesh and assisted it and the current officials paving the same path and supporting Daesh or similar groups, the Supreme Leader said.

Europe is now paying for its mistakes and supporting Takfiri groups and their people lack security in their homes and streets and the US is repeating the same wrongdoing, The Supreme Leader said.