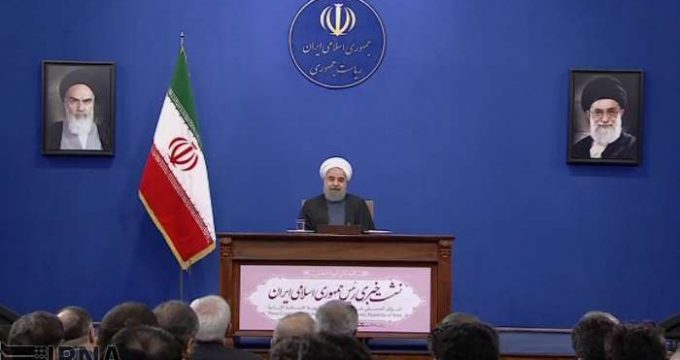 FNA- Iranian President Hassan Rouhani took Saudi Arabia responsible for the darkened relations between the two countries, saying that the root cause of Riyadh’s hostile behavior should be found in its failures in Syria and Yemen.

“The fault is not on us but the distance has been created by them (the Saudis),” Rouhani told reporters in a press conference in Tehran on Monday.

He referred to the tragic Mina incident on 24 September 2015, the execution of prominent cleric Sheikh Nimr al-Nimr by Saudi Arabia in January 2016 and the angry people’s attack against the Saudi embassy in Tehran (which was condemned by the Iranian officials), and said, “Apparently, Saudi Arabia had prepared itself for an incorrect behavior towards Iran whose root cause, I personally think, can be traced in its failures in Syria and Yemen.”

He, meantime, underscored Iran’s readiness to improve ties with Riyadh, and said, “I hope that Saudi Arabia will stop its incorrect (military) operation against Yemen, which certainly prevents improvement of relations (with Iran).”

Saudi Arabia severed diplomatic relations with Iran in January 2016 following demonstrations held in front of its embassy in Tehran and its consulate in Mashhad by angry protesters censuring the Al Saud family for the execution of prominent Shiite cleric Sheikh Nimr al-Nimr in Riyadh on January 2.

Nimr’s execution caused international outrage and sparked anti-Saudi demonstrations in many other countries.

Riyadh has been attempting to rock the boat in relations between Iran and other world states and has spared no efforts to pressure Tehran.